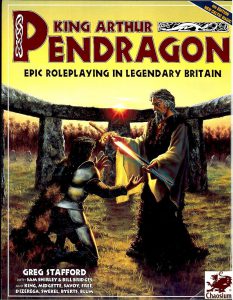 THE ONE ABOUT PENDRAGON

Pendragon is a role playing game that uses the legend of King Arthur as its setting. It is a game I’m particularly fond of mainly because of the skilful use of setting to create a unique and entertaining game.  Its status among gamers is seemingly paradoxical:  On the one hand it has been in print, in various forms, for around 30 years now and it has a small, but devoted following.  On the other hand, it doesn’t have the positive status that its fans think it deserves with quite a few harbouring negative opinions of it.

I was reminded of how some gamers find the game problematic this week when I was tagged in a Facebook post concerning it. A gamer, who I’d never met before, was considering buying Pendragon but wanted “a hack that would make it less of a sausagefest”, i.e., less male dominated.   So let’s deal with that particular elephant in this particular room.  Yes, it is male dominated.  The default character type is a male knight.  Some editions of the rules allow you to play a sorcerer of some kind (Druid, warlock, witch, monk or nun for example) or a Lady or Damosel (on the condition they don’t fight) but for the most part the players are knights, men, all living in a Mediaeval depiction of Dark Age Britain and all part of the Feudal system.  That system underpinned the whole role playing experience in Pendragon.  The characters were knights, mostly born into that class and raised expecting to enter that profession, hold familial lands and enforce the laws of the King (or local lord but in the age of Arthur, he and his Lords are mostly nice, kind and with the interests of their subjects at heart).  Sure, you could be a knight who came up through the ranks of warriors but that was an exception, and you didn’t get the same respect, honour and land that came with those of more noble stock.  You could play an enchanter of some kind, but you then wouldn’t get the power or dynastic aspect of the game the knights would get.  As for women in the game?  Well, options were more challenging there.

The easiest thing for a female gamer to do is play a male knight character. If that didn’t appeal, then one of the magic character classes were an option; less fighting skills but different abilities to compensate.  Or try to become a non-knight warrior woman of the Amazonian or Saxon variety but that gave you no honour or glory.  Or you could play the classic type of Arthurian woman; unskilled in combat, but skilled in medicine, the arts, politics, some potion brewing, courtly skills and…gasp!…seduction!  True, you’d be sitting on the sidelines during the fights but there was the chance you could show up your thick male colleagues by getting the low down at court.

However, it still comes down to finding a role within a Feudal society and in the world of Pendragon, that means men are more dominant and powerful in their respective social bands than women. A noble woman was still vastly superior to peasant males, but not the equal of noble men.  This person who wrote the Facebook post was looking for a way to improve the lot for women in the game but his idea was to have a rule hack…what he needed to focus on is altering the setting.  What does he hope to achieve for women characters?  If women are to be the equals of men what does that look like in a Dark Age/Mediaeval setting?  Are there female knights in his world?  Are warrior women more common?  What about the nobles; are kingdoms and provinces ruled by female monarchs and what does that do to the Feudal system, what are the implications for marriage and starting a dynasty?

Pendragon is a dynastical game. Each adventure played takes place over a year so the characters age more rapidly than in other role playing games.  The idea is that the characters find a suitable wife, start a family and down the line the player will then play the son and then the grandson in due course.  The lands, wealth and glory are passed on through each generation.  Offspring can be the carbon copy of the father, or you could have a bit more fun by making them the antithesis or even have a family curse passed on.

A huge part of the game concerns the personalities and passions of the characters. This is actually incorporated into the rules and the character sheets.  The stronger the personality trait, the more glory you gain.  Some traits are virtues and others vices and they guide the characters’ actions and because sometimes players have to act against their better judgements in order to follow through the personality of the character the game avoids the slightly psychotic opportunist attitude that gamers often go for in RPGs.  In Pendragon, a character can fester hatred for a particular foe or fall madly in love with a beautiful woman which drives him on to do ever more risky adventures to win her favour….or fall madly in love with someone else’s wife (that’s very Arthurian).  The game rewards such behaviour, even rewarding it if your character dies doing something that is illogical but very passionate (your son will inherit the glory gained by the father’s reckless stupidity in the name of love).

But going back the original issue about it being a male dominated game, making women social equals of men in Pendragon would require looking into all these aspects of the game and seeing the effects it would have on it: The Feudal System, marriage, family, inheritance, personality traits, ambitions and passions.  If female knights are permitted then how would she go about establishing her dynasty?  Who would be the husband?  How would she raise the children whilst being away half the year on campaigns or quests?  Can she inherit land and if so can she pass it on to her descendants?  I’m not putting these points to say you can’t overhaul society in Pendragon, but to show that the game would need to address various issues or else it just ends up being a run of the mill fantasy RPG.

For me, I accept the game as it is written. The historian side of me accepts the world as depicted because in most cases it matches history.  It’s a world of strict gender roles in society with a caste system.  When it comes to political correctness in role playing games, it’s often easier to game in a sandbox set of rules such as Dungeons and Dragons or Traveller because society is left to be vague enough to project your own sensibilities onto them.  Historical games present a challenge to PC attitudes.  Call of Cthulhu has some sexism and racism in its 1920s setting.  Pendragon is a man’s world where women are objects of desire or serve a vital social and familial function.  Historical bases RPGs are less malleable to social engineering and I think that puts off many gamers, particularly those who can’t check their political and social sensitivities at the door before playing (but who, strangely, don’t have a problem with the mass murder their characters will commit in the game).

My solution was to work within the game’s boundaries. There is some scope to play various types of women in Pendragon but when one female gamer actually wanted to play a knight, she came up with an ingenious solution that was very in keeping with the game’s setting:  She impersonated a male knight.  Borrowing a bit from the stories of Joan of Arc, Pope Joan and other instances of cross-dressing heroines in history, this character assumed the identity of a dead knight and played it out.  Of course there was some thinking on the fly about the consequences of this but it was a valid solution that was in keeping with the game.

In the end it comes down to accepting the game’s premise. This is the game, this is where it’s set and this is the rules of the world.  It’s a struggle for some gamers, who always like to keep their options open even if it is in a world generic and bland as your average D&D campaign.  Pendragon is a game that could only have come from the 1980s, that time of innovation and challenge in gaming.  I seriously doubt whether it would get green lit now, because of PC sensibilities and also because the game is a challenge to gamers in terms of role playing.  As I mentioned, it’s a game where personality traits are a game concept that have to be played out and that doesn’t always result in good things for the characters.  Pendragon has a simple combat system, but it’s very challenging to role play.  That challenge is beyond some, who like more straightforward action as you get in D&D.  But Pendragon is a game that rewards your investment and will challenge players in ways they won’t have seen in other games.  It is unique from that perspective, and which is why you should be wary of tampering with it.