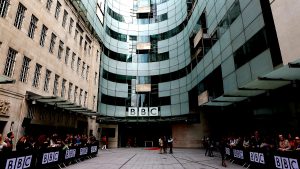 SALFORD….NOW!  BBC admits to having elicit affair with the progressive Newspaper.  Says “we’re deeply in love and committed to one another”.

It’s been revealed that the nation’s broadcaster, the BBC, has been conducting an affair with the left wing progressive newspaper, The Guardian.  The two allegedly met at a meet n’ greet at President Barak Obama’s inauguration in 2008 and “we connected on a deep and intimate level almost immediately”, said the Beeb in an interview today.  “I was struck by The Guardian’s joy and exuberance on that day and felt ze was the one for me, my soulmate.  Ze was brimming full of ideas on how the world should be and how to change things and I was smitten” The BBC continued.

Before that day in 2008, the BBC was married to Impartiality for over 80 years but admitted “the relationship went stale a long time ago.  I’d want to push the boundaries and express post-modern and progressive ideas but Impartiality insisted on balance and the needs of a wide range of viewers, not all of whom would share my opinions on matters.  I felt constrained and trapped in a loveless marriage imposed by Impartiality’s parents; Inform and Entertain and her uncle Educate.  I tried to tell Educate about my ideas for changing the way people thought but he just trotted out the same old line ‘just teach them the facts, let them make their own minds up’.  When I met The Guardian, ze showed me how you could alter people’s ideas by constantly rebuking them, calling everyone a Fascist, pandering to interest groups, trotting out half-baked ideas and seeking counter arguments from fringe nutters in order to make you own side seem better.  It’s been a whirlwind since we hooked up and I’m loving it!”

In a divorce settlement, the BBC looks set to keep the house, car and all the assets.  Impartiality is currently looking for a home but is crashing out on the floor of the alternative media until it can fix itself up with a place of its own.  Top media divorce expert, Google, said that “under current arrangements Impartiality will be demonetised for breaching terms and conditions”.

When asked about the future as a couple, the BBC said “we’re bedfellows with The Guardian but we’re also ruling out marriage as it is a patriarchal and repressive institution.  But we also want to start a family and we’re looking forward to indoctrinating some kids in the future.”