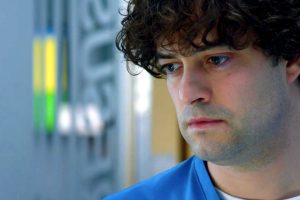 BBC MEDIA CENTRE…..NOW!  The long running hospital drama, Holby City, is planning to introduce a heterosexual romance plot line in a forthcoming episode and is braced for a backlash from viewers.  In an upcoming episode a new member of the Holby staff, who is yet unnamed, will meet someone of the opposite sex and develop romantic feelings for them.

“BBC drama has never shied away from controversial or taboo subjects” said BBC diversity spokesperson Diane Blanch.  “Although we understand that many viewers might find scenes of men and women kissing distasteful or shocking, we feel that the 70 to 80 per cent of viewers who identify as heterosexual have been under-represented in Holby City recently and we wanted to accurately reflect British society in 2017.”

Recently there were complaints that the lesbian relationship between characters Bernie Woolfe and Serena Campbell was not mixed-race but a BBC press statement said “although Britain leads the way in mixed-race relationships, there are a lot of couples who are all white, or all black or all Asian and we wanted to reflect a more diverse section of society by bucking trends and having a same sex couple in the show, and its sister programme Casualty, who weren’t interracial.  We’re sorry if we’ve caused upset to viewers over this.”

After the successful ret-conning of previously heterosexual characters Bernie, Serena and Lofty to bisexual in their orientation, there are rumours that the previously gay character, Dominic Copeland, will have a heterosexual liaison with a new female doctor in an upcoming episode.  Diane Blanch explained these new developments “literally anything can happen with these characters.  We’re throwing everything we know about them up into the air and just having them being whatever we need them to be at any given moment with no heed paid to consistency.”