STRASBOURG…..NOW! The leaders of some of the least successful military countries in history have pledged to merge their armed forces in order to somehow reverse the historical record. 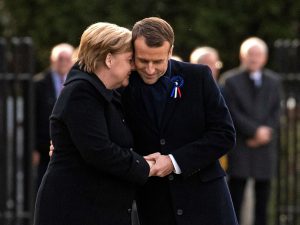 In a landmark speech, both leaders of Les Capitulards and the Goose Steppers have pledged to form a single European army along with the frequently invaded Belgium, the Netherlands, Austria, Denmark and most other military losers from history.

The German chancellor, Angela Merkel, reflected on her country’s poor record of winning wars they started. “We had that one win against France in 1870 but it’s been two defeats against all comers since then. The trouble was we used up most of our good soldiers early on and our allies were a bit crap, to be honest. But now we’ll have plenty more European soldiers to throw at our enemies and they’ll do things OUR way so no mistakes next time.”

President Emmanuel Macron echoed Mrs Merkel’s sentiments and added “France has a great military tradition…of ballsing up military campaigns we were expected to win. Why do you think I have my own private army? But if we combine Germany’s ability to begin a war really well with our ability to pop up right at the end to claim credit for a victory when we were knocked out early on, no one can stop us! Especially when we can use all the other European nations as canon fodder.”

However, he was quick to deny any allegations that he and Mrs Merkel were just “jealous” of the United States, Britain and Canada in terms of military prowess. “Oh no, our desire to form a European army isn’t out of envy of the three most successful military nations in the West; it’s about righting some wrongs and wiping those smug grins off their stupid Anglo-Saxon faces”.

Asked about what kinds of military roles this army would perform, Mr Macron said “we’ll start off lightly by putting down a highly likely insurrection in Italy before moving on to annexing Latvia. Once we’ve got a couple of wins under our belt we can focus on reconquering the United Kingdom and working out how we can get at the United States…if we can crack that one we’ve got it made.”

“Yes I know we have chronically underfunded our armed forces over the years, we don’t have a tradition of victory or excellence and have some pretty big losers in our army but the law of averages says we have to win one at some point. And if we have to finally win one, why not against the United States? I’ll have the railway carriage outside of Versailles all spruced up and ready to go for the day when one of us will sign an unconditional surrender to the other. Mrs Merkel and I haven’t yet decided which one of us that will be.”