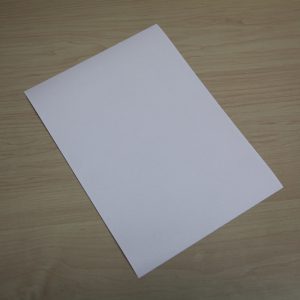 PARIS…..NOW!  A blank sheet of A4 with today’s date on it, which goes by the name of Emmanuel Macron, has beaten crypto-authoritarian and Terri Garr lookalike Marine LePen to be the next French president.

The sheet of A4 fluttered gently in the breeze when the result was announced before settling down again on a desk.  “I’m the president…” declared the paper “…and you can write on me whatever you want.  If you want to be in the EU, just write that down there, just under today’s date, and it will be so.  If you want more EU, that’s fine, just jot that down on me as well.  I like nice things and I hate bad things.  So just write all your nice ideas on to me and I’ll do them.  You can even fold me to make origami, or maybe even a paper plane, or a dart, or a fortune teller….I can also fit into a printer or photocopier so I can print out whatever it is you need of me.”

The flat, two-dimensional blank object promised to end all division in France…”the problem is that too many people have ideas, opinions and beliefs and we need to move away from that so we can all be blank sheets of paper with today’s date.  It is ideas that are at the root of all problems in the world, we have to fight that so we can all be unified in having no ideas whatsoever.”

Mr Macron’s supporters have hailed the off-white qualities he brings to the office “he is young, he is full of hope and above all, he is plain and blank.  The old ideas of left v right, progressive v conservative and modern v traditional have no validity anymore…it’s being homogenous, standardised and blank that will drive European politics into the next century and beyond.”

Thousands flocked outside the Louvre to celebrate A4’s victory and to wave the French flag, possibly for the last time before it is replaced by a square white piece of cotton.  The blank piece of paper is seen as part of the fightback against popular policies which is seen to have blighted Western politics in the last 12 months.  “Even though the more extreme candidate won a sizeable amount of the vote, we must ignore them as they are not blank enough.” said Macron.

As one of his first acts as President, A4 with today’s date will meet the German Chancellor Mrs Merkel and President of the EU Commission Jean-Claude Juncker so they can draw doodles on him.  Canadian Prime Minister Justin Trudeau is also keen to arrange a state visit to France to meet with Macron.  “We could be BFF’s!  I too hold all ideas to be equal…except the bad ones.  People write on me all the time as well.”

He finished his winning speech with “Vive la….wherever it is we live!”