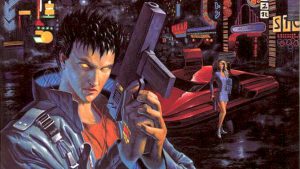 THE ONE ABOUT CYBERPUNK

Cyberpunk, or Cyberpunk 2020 as it became, is a role playing game I respect rather than like. It does many good things, in many ways it’s a great game but there is something about it which I just can’t fully embrace.

For the uninitiated, Cyberpunk is a science fiction role playing game set in a dystopian near future (2020 if you play one version, 2077 if you play a later incarnation). In it, society is decaying, the nation states are failing, central government has all but ceded control to private corporations (who are in turn mostly monstrously corrupt), there are wars all over the place, law and order are ineffectual, there is massive social unrest and life is cheap.  The biggest aspect of this society, and the game, is cyberware:  electronic and computerised body parts which people happily graft onto their bodies.  Microchips are implanted into the brain to enable direct engagement with computers and the internet.  Whole limbs are cut off and replaced with bionic parts.  Almost everyone is a cyborg to some extent (some are just brains encased in full robot bodies) and the flesh is considered inferior, being referred to disparagingly as “meat”.  The game took its inspiration primarily from the novels of the sci-fi writers William Gibson and Phillip K. Dick, as well as the films “Max Headroom: 20 Minutes Into The Future” and “Hardware”.

So much for the background. The game itself has very good rules.  It’s been many years since I’ve played Cyberpunk so I can’t attest to how well that rules system holds up today compared with the ubiquitous D20 and Savage Worlds but at the time it was a very good set of rules which went with the genre of the game.  Combat was deadly and if there was one thing the game publishers, Talsorian Games, did well it was depicting real world weaponry.  Other rules, such as the skill systems and specialist rules on “net-running” (ie, surfing the web…and this was published at a time when the internet wasn’t widely available) were all really good.

And the material printed for the game was very well designed as well. The background to the world, the level of detail and many of the supplements were of excellent quality and showed real imagination.  My two favourite ones to read were the two Chrome books and Land of the Free, the sourcebook of life in America in 2020.  Scattered throughout those books were ideas and plot seeds that fired my imagination for possible games.

But there were problems. The biggest one lay in the character section.  Cyberpunk took the concept of the character class, so central to Dungeons and Dragons, and developed it further into the character template.  This was where a player would choose what kind of career or background they would be:  Net Runner, Media, Corporate, Solos, Techies and Rockerboys (don’t ask), and they would get a basic character with everything pretty much laid out and which a player could customise by putting extra skills or abilities on.  It was a departure from games that came before it insomuch as a lot of the character was pre-designed by the template and role.  Added to that, the game had it that none of these roles particularly liked each other.  Netrunners hated Corporates, Corporates hated Media, Media hated Solos and so on.  Not since the early days of D&D was there a game on the market where party infighting was part and parcel of it.

As a gaming experience, it was pretty grim. Exciting, but grim.  One of the game mechanics, and a decent one, was that with more cybernetic hardware being grafted onto your body the character would lose their humanity.  Put too much computerised machinery onto you, and you might suffer “cyber-psychosis” and go totally tonto.  Not that I thought that mattered in the game; after all the world was so dark it didn’t really matter if you were psychotic or not as most characters were sociopaths in varying degrees, which the game encouraged.  This wasn’t a game of heroics, it was a game of navigating your way through a bleak nightmare future and trying to survive whilst carrying out missions for various patrons.  Players lapped up the technological goodies on offer whilst dealing out a frightening level of violence, which would go largely unpunished by the ineffectual police force.

I was never a huge fan of the cyberpunk genre and of the “mirrorshades” group of sci-fi novelists of the 1980s. I like Blade Runner, of course, and I enjoyed the American TV version of Max Headroom, which centred around the crusading journalism of its true protagonist, Edison Carter (assisted, not dominated by his computer avatar Max Headroom), as he took on the crimes of the future.  This idea of investigating crimes of the future a la Deckard and Carter inspired me to try running my own Cyberpunk campaign where the characters aren’t all at each other’s throats but instead are investigators.  The ideas I got from reading the Chrome and Land of the Free books formed the basis of the crimes:  A brief mention of a medical facility that can put the brains of the elderly into the bodies of artificially grown youthful bodies led me to come up with an adventure about scamming families of the elderly, a promise of eternal youth that was hollow and throw in a bit of social commentary about the quest for immortality.  Another crime followed on from the kind of Judge Dredd school of story writing where futuristic fads and technology go wrong with disastrous consequences.  The characters themselves wouldn’t be the trigger-happy psychos of a standard Cyberpunk game but instead be a bit better and heroic than that.

But the players I had at the time said no. That’s not how the game should be run, I was told.  The designer’s vision of high body counts, shocking violence and virtual anarchy had to predominate.  Looking back at the rules of the game, it seemed that the writers practically revelled in this dystopia, with a hint that they’d like to be cyborgs themselves.  I had read the game incorrectly, and thought it was a warning against such a bleak future.

You see, my style of gaming which had grown with the kinds of games that had predominated in the 1980s was now clashing with the new kinds of games being released in the 1990s. I was of the heroic school of role playing:  Where brave adventurers would take on the forces of evil in D&D.  My Traveller group was out to explore and make money.  Champions was a superhero game and the apogee of heroic role playing came with FASA’s Star Trek RPG, where you got to be a member of a Starship crew in the service of Star Fleet.

Cyberpunk changed all that. It was truly one of the most influential role playing games of all time and was hugely successful, becoming the model for other sci-fi RPGs for over a decade.  Being a heroic gamer in a group dominated by Cyberpunk was like being a prog rock fan showing up at a Sex Pistols gig.  The rise of Cyberpunk and Talsorian Games coincided with the end of FASA’s licence to publish a Star Trek based game.  Same with Victory Games’ James Bond RPG.  In short order, Traveller completely changed its rules system and setting, fatally compromising the game.  A sister game from the same company, GDW, called Traveller 2300 underwent a massive overhaul in order to compete with Cyberpunk.   Before Cyberpunk, 2300 was cowboys in space or the French Foreign Legion in space.  It was a largely bright, positive future where humanity is both exploring the stars and taking on a mysterious alien invader.  After the success of Cyberpunk, the designers of 2300 decided to retool the game to be a cyberpunk style one.   Needless to say, it failed and killed 2300 off:  Fans of the original 2300 didn’t want a cyberpunk setting and cyberpunk fans already had a game which was better designed.

So Cyberpunk toppled Traveller to become the leading sci-fi RPG of the 1990s. In short order, other games companies released their own takes on the cyberpunk genre. FASA, in a complete about face from the type of game they had previously published, released Shadowrunner; a strange cyberpunk and fantasy hybrid where cyborgs, elves and goblins fought brutal gun battles in overcrowded city streets.  There were other games which played around with the cyberpunk/transhuman setting:  Dark Future, Blue Planet, SLA Industries and Ex Machina to name a few.  There was little room for the heroic space cadet anymore.  This whole era of gaming acquired a nickname: Grimdark.  The style of gaming which Cyberpunk ushered in transcended sci-fi games and led to games such as Vampire: Masquerade, where the characters were all vampires who belonged to different clans…and who predictably all hated each other.   Deadlands was the first major effort in a sub-genre that became known as Steampunk:  A western setting in an alternate late Victorian timeline where magic, horror and steam powered technology coincided with a bleak, misanthropic society.  The game was very good, and survives to this day as the basis for the Savage Worlds system but it was often depressing to play:  All the adventures were nihilistic, where whichever side the players chose, it was the wrong one.  Everyone was a shit, and no matter what you did nothing fundamental would change.

I was becoming adrift in gaming during this time. The games I had purchased and played in the 1980s were now largely out of print and seen as old, even if they weren’t really that old.  Even the types of gamers playing had changed.  When I had started, most gamers were nerdy types in sensible clothes, nerdy hair cuts and studious.  The grimdark gamers dressed like their characters:  Black heavy metal T-shirts, leather biker gear, long duster coats, beards, and Goth clothing.  My generation were goody-goody heroes, the new bunch were edgy anarchists.  I didn’t feel so much at home with these new gamers (who drank strange coloured drinks and smoked!) and stuck with what I knew best.

Since 2000 Cyberpunk has, in turn, faded somewhat.  A current incarnation set in 2077 is still around but as role playing has emerged somewhat from the Grimdark era it’s hard to know what the lasting effect has been.  Fantasy has reclaimed its spot at the top of the RPG tree and sci-fi is considered in some circles to be problematic as a gaming genre:  As real world technology advances, the games sometimes struggle to keep up.  Cyberpunk isn’t immune to this either.

So Cyberpunk, for all its innovation, cleverness and attention to detail never became a favourite with me. As punk rock destroyed art and prog rock, Cyberpunk had swept away the space opera game and neither has enjoyed a big comeback or been rekindled and I think role playing games have lost a bit of soul in the process.  Because that’s what I think is the biggest problem with Cyberpunk:  There’s no soul….it was replaced with cybernetics.