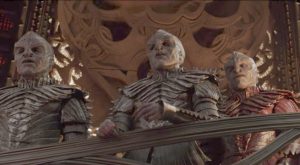 OK, so I’ve absorbed Star Trek Discovery’s first two episodes after following the ongoing production developments since the show was announced and now it’s time for me to give my opinion as to what’s gone wrong because it has…well, for me anyway.  However, there are a lot of missteps in this show and one blog post isn’t going to be enough so I’ll break it down into sections covering where I think the show has made mistakes and what I think should have been done instead.

First a caveat about my “fixes” to the show.  I realise CBS or Paramount aren’t going to phone me up and offer me a job as a scriptwriter or show runner.  I’m pretty much resigned to never working in network TV ever again so this isn’t a “oh why didn’t they call me to set things straight?” section, but instead it’s sharing my thoughts as both a fan of Star Trek and as a writer myself as to how you can do things in a way that makes narrative sense so that you, as a viewer, can know a little bit more about what works in a script and what doesn’t.

So let’s tackle our first section of the problems of Star Trek Discovery and no, I’m not going to address canon or the behind the scenes ruckus or even the central character here.  My first criticism is….

As the show opens with them, let’s talk about the Klingons.  Although a lot of existing criticisms of the Klingons centre around their redesigned appearance; criticisms I mostly agree with, my problem is their redesigned role in the Star Trek universe.  So from the opening scene we get the new look Klingons being addressed by a cult leader who has three objectives:  Racial purity, isolationism and unity.  I’ll leave the first of those until last but the isolationism and unity aspirations run counter to the Klingons as established in previous Trek lore.  Traditionally, they have been militaristic and expansionist; the chief virtue of the Klingon race (as they see it) is martial prowess.  Martial prowess needs to be tested in combat if it is to be a defining characteristic of a race so either that prowess has to be used against an external enemy or an internal one.  But the cult leader, T’Kuvma, is calling for all the Klingon houses to unite so that does away with an internal struggle and he’s calling for isolation from the encroachment of the United Federation of Planets so that’s pulling away from the external threat as well.  T’Kuvma also claims to be following the teachings of Kahless but what we know of the legendary warrior-king-philosopher of the Klingons is that he fought all the other tribes and houses to establish his dynasty before hunting another race on the Klingon home world into extinction.  Kahless was not an isolationist.  Now, of course, T’Kuvma might be like a false preacher taking the words of Kahless and twisting them for his own means but then no one ever pulls him up on this.  After some dialogue, the Klingons pretty much go along with T’Kuvma without a conflict among themselves.  Bearing in mind that Sarek later says that the Klingon Empire has been in disarray for centuries it seems odd that T’Kuvma doesn’t have to do much to unite his people…except light a beacon, in unclaimed space, near a Federation ship and suddenly all these Klingon ships appear.

My point is that the Klingons, as they appear at the start of the episode, do not represent an existential threat to the Federation.  They want to be at one with themselves and then withdraw from polite interstellar society.  They only become an existential threat in response to the actions of the Federation.  Or, at least, the actions of a single Star Fleet officer.  So what’s the problem with the Klingons being isolationist?  Surely if they’re not waging wars of conquest anymore then what’s wrong with giving them what they want and leaving them alone?  Sarek later advises Burnham that a unified Klingon Empire might pose a threat down the line but we’re not at that place yet.  Sarek basically prompts Burnham to pre-emptive action which is a very surprising thing for him to have done:  Given that Sarek has always been on the side of unity and internal peace, he is happy to promote those as virtues the Federation should strive for, but he’ll deny it for the Klingons.  His suggestion that you should always fire first at the Klingons before they fire on you in order to gain their respect is risky diplomacy, to say the least.  It is a stratagem Jim Kirk would never use (he preferred bluff to a pre-emptive punch in the gut) and also one that is used in Babylon 5 but which leads to a bloody war which kills billions.

My response to this is “what are the writers thinking”?  For an isolationist antagonist to work, there needs to be a big problem why isolationism is going to hurt everyone around them.  For the Klingons, a warlike race, to be isolationist is a good thing for everyone else.  The Romulans spend a century being isolationist and they cause no trouble until they decide to become expansionist again.  Now the Federation, on the other hand, would be a bad organisation to become isolationist.  Imagine a Star Trek premise that has the Federation becoming isolationist.  Star Fleet is no longer exploring space, trade barriers are erected, they no longer arbitrate in interstellar disputes, they stop being honest brokers of peace and in that vacuum the Klingons, Romulans, Gorn, Tholians and Cardassians expand to engulf more subjugated worlds.  So our protagonist has a moral justification to be proactive because the story becomes “in order for evil to triumph all it takes is for good people to do nothing”.

But in the end the producers made this decision to base the Klingons not on the old Cold War Russian enemy, but on the Trump-supporting MAGA crowd.  It’s a weird choice because America isn’t analogous to the Klingon Empire, it’s the inspiration for the United Federation of Planets.  But the choices made haven’t re-enforced the MAGA analogy, it’s inadvertently conjured up another one.  For you see T’Kuvma is not Donald Trump.  T’Kuvma has divided no one.  The Klingons talk about racial purity but we see them do nothing about it.  They aren’t shown purging the impure from their society, they only talk about resisting absorption from the UFP.  This makes the UFP seem more like the Borg; they desire homogeny not based on race, but on thought.  If the Klingons resist and stand their ground then they must be hit first in order to gain their respect and complicity.  Now the analogy has shifted into George W. Bush, Barak Obama and Hillary Clinton territory.  I don’t think this is what the producers wanted.

Other than this problematic motivation for the Klingons the other, more superficial, issues have led to a confused narrative and raised questions about where Discovery sits in the established Star Trek canon.  The physical changes have not only made the Klingons appear more alien and less humanoid but the heavy prosthetics have obscured the expressions of the actors so that they have less of a dramatic range than previous Klingon designs.  But if Star Trek Enterprise explained how Klingons went from ridged foreheads to smooth and the original series prominently featured smooth foreheads, where do these more alien and even more ridged Klingons fit in?  If T’Kuvma’s people have kept their foreheads and want racial purity to combat the rise of the smooth headed Klingons (who became that way because of a clash with the Federation) that would make sense.  That would be a good plot driver as well.  In this scenario, the Klingons want their racial purity because the Federation contaminated it (it was an accident, guv!) and then they will want revenge.  That works AND it ties in with canon.

I am left with the impression that the show is run by people who want to use sci-fi to present morality plays that reflect on contemporary issues, but aren’t smart enough to think through a plot and its consequences especially in the established setting of Star Trek.  Based on episodes one and two, the Klingons have become the antagonists who shouldn’t have been…which reflects badly on the protagonists.