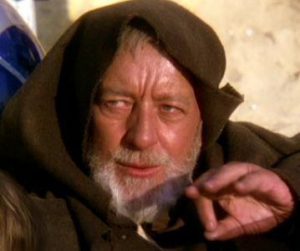 WASHINGTON D.C……..NOW!  Leading Democrats tried using the Jedi mind trick to convince millions of voters and media that they never claimed that President Donald Trump was being manipulated by the Russian government nor was he, as many claimed, A “Manchurian Candidate” for President Putin.

After President Trump’s warning and air strike against Russian backed Syrian forces the Democrat party, who until recently wanted Trump investigated and impeached for receiving Russian help in winning the 2016 US presidential election, had nothing but praise for the President and said “We never wanted President Trump impeached” whilst wiggling their fingers.

The Jedi mind trick, which gives people the power over weak minds, was being used because President Trump’s policy on Syria and Russia is now more in line with Democrat policy and that it was felt that some rewriting of the historical record was now needed.  Apologising or taking back remarks was considered by senior Democrats was considered for 1.5 seconds but was rejected in favour of altering the record, discarding inconvenient quotes and events and airbrushing the awkward bits as it is a long standing tradition on the Left.

The mind trick was hugely successful on the staffs of CNN, MSNBC, the BBC, Salon, Vox, The Guardian, Buzzfeed and the Huffington Post.  However, there were mixed results among voters with less than half falling for it.  “I guess there aren’t as many weak minds out there as we first thought” said the DNC spokesperson.  When asked what other measures are being used in denying Democrat allegations about Trump’s Russian connections other than the Jedi Mind Trick, Tom Perez said “look into my eyes….look into my eyes…you are feeling sleepy…you are feeling sleepy….”

A statement from a senior Democrat insider later said “For a while we may…and I stress, may….have been concerned that Trump, I mean, President Trump, was being unduly influenced and controlled by Russia but now he’s doing the right thing by pushing them towards war which is what we Democrats have been angling for some time now.  Actually, scratch that….we never wanted war with Russia…we never wanted war with Russia….now move on.”