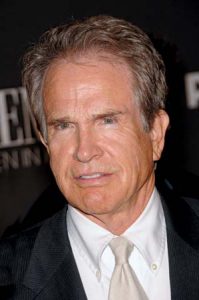 LOS ANGELES….NOW!  The CIA have disclosed information that they have strong reasons for suspecting Hollywood superstar and sexpot, Warren Beatty, of having sinister connections with the Russian government.  The agency has knowledge of a man who has a document that he got from another man who photocopied the original document given to him by yet another man who once worked for the Russian government.  This document shows that Beatty, 79, was instructed to announce the movie La La Land as Best Picture at the 2017 Oscars at all costs.

It is rumoured that Russian President, Vladimir Putin, likes good old fashioned musicals and didn’t fancy another movie “where some poor person triumphs over the odds.  I bored with that shit”, he is attributed to saying.

The Kremlin apparently hacked into the firm that prints the cards with the winner written on them and changed the wording of the best movie from Moonlight to La La Land and then instructed Beatty, via a radio earpiece, to swap the envelopes around before announcing the winner.  In the event of the show’s organisers being tipped off to the secret Russian plan, Beatty was given orders to implicate Faye Dunaway and make a quick escape to LAX airport.  The plan was foiled when a crack team of liberal artistes stormed the stage and announced the true winner before leading a seemingly befuddled Beatty off stage.  Viola Davis, who had won a best supporting actress award earlier that evening announced that “only artists have the uncanny insight to see beyond our normal 4 dimensions and can discern the tiny patterns of force that bind the universe and chart destinies.  Then I alerted security and they hauled Warren’s sorry ass off stage”.

Beatty’s involvement with the Kremlin dates back to 1974, where he was recruited through a KGB programme called Operation Parallax View and was indoctrinated by watching a film of words juxtaposed with violent images.

8 years later, Beatty made a movie called “Reds” which was apparently about American communists working in Russia at the time of the Revolution but as no one has ever seen that movie, which came runner up to the lovely, fluffy “On Golden Pond” at the 1982 Oscars, we can’t say for certain what it was about.  However, the CIA documents show that Beatty was so incensed at not winning the Best Picture Oscar that year that he vowed to one day wreak his revenge and pledged his loyalty to his KGB handler: A young agent who went by the name of Vladimir Putin.

Beatty’s co-presenter Faye Dunaway was shocked by the revelations.  “I’ve known Warren for 50 years…and when I say know I mean in the Biblical sense as much as anything.  I never suspected him as being a Russian stooge but now I look back on it there’s so much communist subtext in McCabe & Mrs Miller that I’m surprised no one noticed sooner.  Well, we artists are all too busy making the world better to notice such things.”

The Hollywood trade magazine, Variety, said it would continue to work tirelessly to find a way to blame YouTuber, Pewdiepie instead.