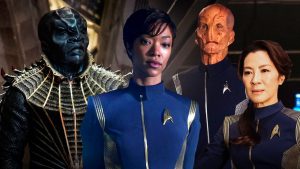 In keeping with the series’ long tradition of forward thinking casting, the producers of the new Star Trek series, Discovery, have taken the bold step of featuring an utter douchebag as it’s central character.  “Over the years we’ve had the iconic Mr Spock, an alien, then a black captain (Sisko), then a woman captain (Janeway) and now, in the show’s tradition of pushing boundaries, we’re featuring an unlikeable asshole as the central character” said one of the 157 co-executive producers of the show, Bryaine Saltz.

“We wanted to have a central character who could give the viewer a different perspective” continued Saltz.  “Not only is she the second in command, which gives the series a different dynamic, but she’s a jerk as well.”

In the series opening episode the central character, Michael Burnham, is a human raised as a Vulcan and went to the top Vulcan academies making her an arrogant shit as well as a douche.  As the episode unfurls she carelessly kills a Klingon before nearly causing a war.  To resolve the crisis, she advocates launching a pre-emptive strike on the Klingons and when her captain refuses to do so, she attempts to mutiny and is arrested.  As a human raised by Vulcans, she indulges in the worst aspects of both races.  “We’re taking flippant disregard for consequences to a whole new level…not even Jim Kirk caused this much chaos!” said an enthusiastic Saltz.

Due to the sensitivity of the networks over the years and the desire to avoid offence, Star Trek characters have only been douchebags in small amounts.  Kirk showed vanity, Picard pompousness, Sisko could be ruthless and Janeway had a raspy voice but all of them were paragons of Star Fleet and upheld its values.  “It’s a formula that needed re-inventing so we said, ‘what if we removed the paragon bit and explored how insufferable a main character can be?'”  Not only will Burnham be unlikeable, but she’ll be surrounded by an array of possibly psychotic and argumentative supporting characters commanded by a deranged captain.

Although Star Trek has traditionally used science fiction to explore contemporary issues, the producers of Discovery have come in for some criticism for some of the hot button topics of today such as likening Klingons to Trump supporters and advocating punching Nazis even if they’re not trying to punch you.  “Yes, we’re being true to Gino Rodden-whatever’s vision of a sociali….I mean, liberal, future” said Saltz, “but as this is meant to be set 10 years before Kirk’s time *snigger*….heh, heh, they’re still buying that line, Alex!  No, I mean totally consistent with the timeline.  Honest.  Anyway, as this is set in the series’ past we don’t have a holodeck, instead there’s a ‘Safe Space’ and phasers can be set to stun, kill and microagression.  As well as bringing back traditional opponents such as the Klingons, there will be new enemies, such as the nebulous Wytte Supremacy, an enemy that is everywhere and can assume any form as long as its the colour white and who can only be defeated by being punched first.”

The producers hope that viewers will eventually warm to the new douchebag characters by the time of the 4th series finale.

The Orville’s next episode is on October 5th on Fox.