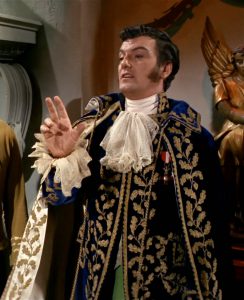 In a move described as “bold”, “innovative” and “audacious” the social media site, Twitter, named the all-powerful alien energy being known as The Squire of Gothos as its new executive director.  The Squire, whose real name is Trelane, has a reputation for completely arbitrary decision making and toying with others purely for his own entertainment and these are the qualities Twitter’s owners were looking for in someone to manage the day to day operations of the website.

Trelane was appointed to the position, seeing off competition from The Celestial Toymaker and Colossus: The Forbin Project and has been praised for his creativity and ability to create convincing worlds just by the power of his imagination but critics cite his run in with Captain Kirk of the Federation Starship Enterprise on Stardate 2124.5 as evidence that he might not be stable enough to handle the job.  Media analyst Jeff Busquets sounded a cautionary note “He’s basically a spoiled brat who threatened the lives of the Enterprise crew and turned a mere disagreement with Kirk into a personal vendetta which only ended on a positive note by the intervention of Trelane’s parents.  I don’t think he’s up to making decisions that will turn around Twitter’s fortunes and encourage new people to sign up to the site.”

Trelane has answered critics in a typically robust manner.  “When I had my run in with Kirk, I was basically a child but I’ve matured a lot and now I am the equivalent of a teenager in your puny human reckoning.  So I know everything, I’m smarter than most adults and I care about issues that affect young people that older, weaker, feeble-minded Grups just don’t understand.  Also, when I had that run-in with the Humans the first time I was heavily into Napoleon and dressed like him which is a bit sad,  But Earth time has moved on and now I’m really inspired by Lenin and Stalin.”

Asked what his policies towards freedom of speech on Twitter will be, Trelane said that “people who agree with me and do as I tell them have nothing to worry about.  But those that defy me, or displease me or just don’t join in with my kind of fun will be DEAD, DEAD, DEAD!”

Already Trelane has banned the accounts of “killjoys” Milo Thingamy, Sargon of Wherever, Paul Joseph Ringo and Watson and Pepe lePewdiepie because “they just don’t play fair!” whilst giving rewards to those that agree with him such as block-king Steve Shrives, Hillary Clinton apologist John Fugelsang and violence advocate Lexi Alexander.  “I like them!  And that Will Wheaton…not like WILLIAM SHATNER!  He’s another that won’t play by my rules!  He shall appear in my court and he’ll be guilty!”

As the hashtag #FetchTheParents began trending Trelane responded with “my parents so let me have my own way without interfering now….they’re teaching me independence and self-reliance a lot more now so, yah, screw you guys”

Meanwhile Facebook have hired Charlie X in a move to crack down on what it calls “hate speech” on their website.