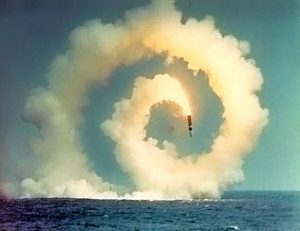 LONDON…..NOW!  Prime Minister Theresa May was evasive when asked the question “just where was that Trident missile that went haywire aiming for?”

“I have complete confidence in our Trident deterrent” said the Prime Minister “and did you see that cloud formation earlier?  Cumulous Nimbus, wow!”

But evidence has emerged that the missile’s target co-ordinates included Holyrood, the home of the Scottish Parliament.  “It was just a test of the system and crew efficiency” said senior Royal Navy officer Vice-Admiral Pye Hastings.  “Our fleet of Trident submarines contain a number of hostile targets in their targeting systems:  Moscow, Beijing, Pyongyang and Holyrood to name but a few.  We are ever vigilant to the threat of attack by a totalitarian one-party state which intends harm to the UK and as it so happens, the Scottish Parliament fits that criteria.”

“People say ‘oh the Russians! The Russians are a threat!” continued the Admiral “but we have to prepare for the situation where a country, completely out of the blue, decides to forgo all diplomatic niceties and spring a surprise attack on us….or a second referendum on independence.”

However, the target of the missile is determined not by the Royal Navy, but by the UK government.  An insider at the Foreign and Commonwealth Office, who declined to be named but agreed to an anagram version: SANDRO NEJON, said that it was former Prime Minister David Cameron who added Holyrood to the list of nuclear targets but Mrs May has added her own personal choices:  Brussels and Centre Parcs.  “She had a bad holiday experience there once” said Mr Nejon.

An SNP spokesperson, Carl Panzram MSP, was shocked and outraged when informed that Holyrood was listed as a target for a British retaliatory nuclear strike.  “This kind of belligerence by the Westminster government will not be tolerated by the Scottish Parliament.  As we are against nuclear weapons, we are instead developing an interdiction device that emits a piercing, brain-damaging howl constantly, day and night, never ceasing, always droning on and on and on and on until the listener is driven insane and desires nothing less than putting a BBQ skewer right through both ears until the pain centres and most of the cognitive areas of the brain no longer function.”  Nicola Sturgeon was unavailable for comment as she is required at the testing centre for this weapon.