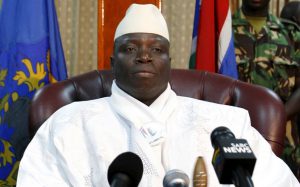 THE GAMBIA…..NOW!  President Yahya Jammeh, who recently lost his re-election bid for the Gambian presidency and who refuses to accept the result and stand down, has received support from UK and American voters who supported remaining in the EU, Scottish independence and Hillary Clinton.

“We know what it’s like to lose an election that by rights you should have won” said Giles Bratt of the online pro-EU group ‘We F***ing Love The EU’.  “And like us  President Jammeh is refusing to accept the result; he’s our kind of guy!”

Meanwhile, in America, supporters for Hillary Clinton’s failed Presidential bid are donating thousands of T-shirts and bumper stickers that read “NOT MY PRESIDENT!” but with the face of Donald Trump replaced with that of the winning presidential candidate Adama Barrow.

The Scottish National Party has lent its support as well.  Morag McAuliffe, a councillor from Glasgow, wanted to offer encouragement for President Jammeh.  “When you don’t get the result you want, then try, and try, and nag, and nag, and whine, and complain and needle and press and complain and just keep getting on everyone’s nerves until you get the result you want.  It worked for us, well it will in time.”

President Jammeh is seen as the establishment candidate, which chimes well with the losers of Western elections and referendums, and whose policies include claiming discovering a cure for AIDS, imposition of strict Sharia Law and killing all homosexuals.  “He’s got my support!” said Liberal Democrat leader Tim Farron.  “He sees the benefits of closer African union and will take his case for re-election to the country’s supreme court in order to overturn the public vote which I can totally relate to.”

“We’re in the perfect position to offer advice and support to President Jammeh” said Ana Copernicus of the left-leaning YouTube channel “Fak Newz”.  “Whether it’s finding some obscure rule to overturn the result, downgrading the election to merely and  ‘advisory’ vote instead of binding or blaming Russian hackers, we will do our best to get the message out that democracy sucks if the other side wins”.

Giles Bratt took to Twitter to berate those who voted for Barrow.  “You’re all stupid fucktard cunts” he wrote before composing some more acerbic and bitter tweets which he thinks will change millions of voters’ minds.