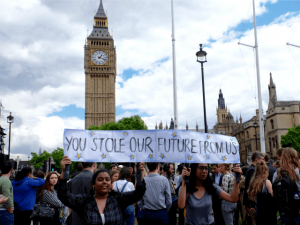 LONDON: A group of activists who support Britain’s membership of the European Union have today lobbied members of Parliament to legally declare all those who voted to leave as not existing.

Giles Bratt, who runs the online group “We Fucking Love The EU”, says “the 17 million voters who recklessly catapulted the UK into the oblivion of non-membership of the EU have caused irreparable damage to our society and so the only rightful solution is to declare them non-existent and their votes, therefore discounted.”

Under proposed plans, all those who voted to leave will have their passports, birth certificates, drivers’ licences and all forms of official documentation destroyed and their names erased from the electoral register. They will still, however, be eligible for taxation.

“With one stroke” Mr Bratt explained “the result of the Brexit referendum will be transformed into a 100% win for Remain. Also, because all those who wished to leave the EU will no longer exist in law, no one will remember why we even had a referendum in the first place” he said with a smug grin spread all over his face.

When asked what would become of the 17 million UK citizens who voted to leave, Mr Bratt said defiantly. “They don’t exist.  Why bother thinking about them anymore?  This will solve so many so problems as well as housing and infrastructure improving with 17 million fewer people.”

Asked whether he was advocating mass murder, he clarified his position saying “No, you don’t get it…no one is going to die because the people you’re talking about will no longer exist. You just ignore them.”