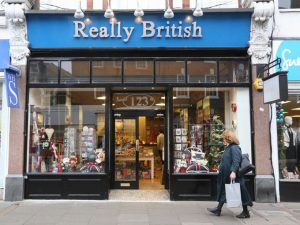 LONDON….NOW!  A group of outraged residents of Muswell Hill, London, with absolutely nothing better to do with their lives have launched a campaign against local shop “Really British” which specialises in novelty United Kingdom themed tat claiming that the establishment is “racist”.

Michael Wince, a local who apparently has no meaningful job, relationships or even social life, is spearheading a campaign against the shop which he claims is “racist to the core, deeply divisive and extremely offensive to anyone who is not British or who hates their own nationality, like I do.”  When asked what it is about the shop or its merchandise that is racist, precisely, he gave a blank stare and said “well, it’s obvious isn’t it?  It’s got the word ‘British’ and the Union Flag prominently displayed.”  Another local, librarian Karen Thirlaway, pointed out to Wince that those are symbols of nationalism, not racism but she was quickly shouted down by Wince and his fellow protestors who likewise have nothing going on of any depth or meaning in their vacuous lives.  “Quoting dictionary definitions is in itself racist!” said local activist Ruth Bigley, who is a campaigner on local issues, a blogger and Momentum supporter and thus contributes little to the overall well being of her community.  “The dictionary is the invention of white men” she continued “and racism means exactly what we want it to be in any given situation!”  Ms Thirlaway then left the scene as she had a busy day ahead at the library where there was to be a special event for local children before meeting up with friends she hasn’t seen in a while in the evening.

Supporters of the shop claim that all that’s being sold there is the kind of British themed kitsch that’s popular with tourists and old people and that there’s nothing racist in that.  A passer by said “I mean, it’s just the usual Union flag cushions, hideous plastic models of the Queen, 3-D jigsaw puzzles of Big Ben and the like.  Oh, and the word ‘British’ is on the shop sign…sorry I can’t stay anymore to be interviewed but I’m on my way to give blood and to meet my parents for lunch”.

But Wince remains unconvinced by any contrary points of view.  “This shop is incredibly offensive; anyone who is not Bri…Br…Brit…I’m sorry, I cannot even say the name such is my hatred of the land of my birth and upbringing…will be  upset and angered to the point that they will be rendered speechless and powerless to mount their own protests and thus will have to rely on white, middle class North Londoners such as myself to fight their battles on their behalf.”

Giles Bratt, of the online pro-EU campaign group We F***ing Love The EU said that the shop is an affront to all Londoners who voted to stay in the EU.   “This is just rubbing our noses in it” he said.  “I, along with every single one of the 127% of Londoners who voted to remain in the EU, are offended to the point of mounting an online petition with 38 Degrees.  What is the point of the Union flag if not to signal an unprovoked, all out attack on EU citizens and right-thinking Londoners.”  Bratt, who refuses to leave the confines of the London boroughs of Camden and Islington except to go on EU funded trips to European countries furthermore claimed that every time he sees the Union flag, he has to vomit.  “I can’t get through the Olympic games without puking.”

The anti-Really British protestors are due to hold a meeting at a local café and craft shop to decide what to do next…without actually purchasing any refreshments or painting a ceramic pot.  “We’ll continue to protest, nag, call anyone who doesn’t agree with us racists and stoke the fires of needless outrage” said Wince “and nothing; not even quality time with friends and family, learning something, contributing to life or even enjoying ourselves will get in our way!  We’re in this for the long haul!”

Meanwhile, on Tottenham Court Road, there were no protests outside of tourist shops that sell British themed goods and which are staffed largely by minimum wage workers from other nations.