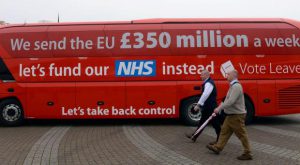 LONDON…….NOW!  Satirical website, Newsthump, today celebrated using the infamous Leave campaign’s Brexit bus as the butt of a joke for the 1,000th time.  “It’s been a goldmine of humour for us” said a spokesperson for Newsthump.  “So much so, we can’t let go of it…we love it, it’s our go-to joke when it comes to Brexit and the last few weeks we’ve been on autopilot with it.”

The bus was painted with a slogan that implied that an extra £350,000,000 could be spent on the National Health Service if the UK left the European Union but it was criticised for being misleading by many on both sides of the referendum.  As the campaign wore on, Official Leave gave up on the claim and focussed on other things…such as fighting Bob Geldof on the Thames.  However ardent Remainers, still holding a grudge, have latched on to the bus and continue to reference it with Newsthump leading the way.   “We sit around the office thinking ‘what would be a good joke about Brexit?’ and someone replies ‘Brexit bus?’ and we’re already 3/4 of the way to a punchline.” Said the spokesperson.  “It’s also a great time saving comedy device….by using the bus as the subject of a joke and recycling the humour over and over it frees us up to concentrate on other things such as….erm….well, other things.”

Bob Klemm, who campaigned for Leave, was surprised to discover that the bus was still being used for satire.  “I’d forgotten about it to be frank” he said.  “It was a daft claim and it shouldn’t have been made but I just got my head down and concentrated on those other issues that voters were concerned about such as sovereignty, being able to elect your representatives, Federalism, the agricultural policy, the fisheries policies, the immigration levels and Schengen, the ramifications of rapid expansion of the EU, accountability, the Greek financial crisis, rising youth unemployment in the Mediterranean nations, EU policies on censorship, stagnant economic growth, George Soros’ influence, belligerence with the Russians and the common European army.  You know, the things Remain refused to talk about.  So there are people out there still blaming the bus and mocking voters about it you say?  Sounds pretty desperate.”

Meanwhile the staff at Newsthump refuse to rest on their laurels.  “Now we’ve reached the 1,000th joke on the subject, let’s push on to 2,000 or even beyond.  The bus is the gift that keeps on giving…well, for us at least.  Because it was always about the bus.  Only the bus.  I don’t recognise those words that Leave campaigner you interviewed said.  Bus, bus, bussy, bus.  Man, Brexiters are soooooo dumb.  They worshipped that bus….they so did.  No!  I won’t hear anything to the contrary!  The bus!  The bus!  The bus!  Look into my eyes….the voters believed the bus AND NOTHING ELSE.”

A compilation book, “Newsthump: The Brexit Bus Years” will be available from their website this Summer and contains all 1,000 jokes about the Brexit Bus plus a few bonus jokes that weren’t used because they weren’t bus-sy enough.