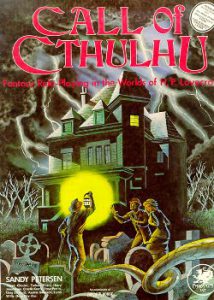 I’ll never forget my first ever game of Call of Cthulhu and if you began the same way as I did, I’ll wager you’ve never forgotten your first time either. There’s an introductory adventure that is contained in the back of every edition of the rulebook called either “The Haunting” or “The Haunted House” (depending on the edition) and it has scared every gaming group that has ever played it.  It’s the reason it’s never been dropped from the rules over 30 years.  The set up is simple:  Players are asked to investigate a supposed haunted house, they examine the history and get an idea that the house may be haunted for real, then when they investigate the property itself, malevolent forces try to overpower the characters from poltergeist activity hurling furniture at you to levitating knives trying to stab you before the climactic confrontation with the evil itself down in the basement.  It’s standard horror movie/haunted house fare but as an introduction to horror role playing games it’s one of the best.

A great start to a game which debuted in the early 1980s and which is still in print and very popular. When it was first released, it was very different to the kinds of role playing games on the market (not least that new players spent considerable time trying to work out how to pronounce Cthulhu).  Not only was it not a sandbox game, like the dominant games of the era (Dungeons and Dragons and Traveller), but it was a horror RPG based on the works of a specific author; H.P. Lovecraft.  It could have been produced as a generic horror RPG where the players had to take on ghosts, vampires, werewolves and the stock monster company from an old Universal or Hammer movie but it went for the Cthulhu Mythos of Lovecraft and his chums.  At the time Lovecraft was fairly popular as a horror genre writer, but hardly a household name.  The game probably generated a few thousand new fans who got introduced to his stories via it.  It was a bold move for the time, but clearly the company producing it, Chaosium, had faith in it because of the high production standard of the time.  And they were right to have faith in it because it sold extremely well and is a firm favourite among gamers:  Very few have not played it.  That opening scenario made for an instant classic.

The trouble is, it might be too good because ever since playing that scenario I’ve been trying to find a Call of Cthulhu adventure that is as scary and frightening as that one. I’ve come close, with master works such as Masks of Nyarlathotep or Shadows of Yog Sothoth, and the high level of risk means that player character deaths are more common than in other games, but for chills and the heebie-jeebies, nothing has surpassed The Haunting.  Perhaps it’s that after the first game, the players wise up to how the game works and they’re on their guards a lot more?  Or perhaps the bigger adventures ignore the fear that comes from the common things in our daily lives turning against us and instead go for the big, bad monster shocks?  Whatever the reason, I’m still searching for something in the game that will scare the bejeezus out of my players.

The publishers and fandom don’t help. Some products and spin offs relating to the game have diminished the horror somewhat with the result that it can now be a bit…campy.  Not what the original designers probably had in mind back in 1982.  In one supplement book there was a jokey poem based on the tune of “Chattanooga  Choo Choo” which became inexplicably popular among gamers, but that alone didn’t nix the fright:  Although it did undermine a referee’s best efforts to create a spooky atmosphere when someone started singing it just before the monster struck.  The beginning of the slide into Cthulic-farce was probably the fluffy Cthulhu toy followed by the mock U.S. election bumper sticker that read “Vote Cthulhu: Why settle for the Lesser Evil?”  But these things are mere trinkets and adornments that have zip all to do with the way the game is played.  Within the game itself, there were other developments.

The first was a supplement called Delta Green which attempted to give the Cthulhu mythos a modern setting. It was very popular with a section of gamers who declared that the original 1920s setting was a lame duck:  Their reasoning was that the 1920s was too removed, too distant and un-relatable for modern gamers.  However, I suspect that another reason was that a modern setting gave characters access to more high tech solutions to combatting the monsters.  Certainly a lot of the Delta Green book is taken up with weapons and equipment.  The 1920s implied a certain genteel civility which some players found difficult to role-play.  Modern day allows for a greater variety of anti-social types to be played and panders to that default role-player alignment:  slightly psychotic opportunist.   Delta Green is also a top secret quasi- government department which gives the players the safety net of calling in the cavalry or getting the big bucks to build stuff.  The game then can be played either taking on the classic Lovecraftian creatures or else go off into more X Files kind of conspiracies, aliens and crypto-zoology.

For my money Delta Green is almost an entirely different game to Call of Cthulhu. It shares  the same mythos and game mechanics but it plays very differently.  It’s often exciting (at the hands of a decent referee) and interesting but it’s not scary.  The game setting doesn’t deliver the chills and creeps that the parent game can do.  It’s akin to a lot of modern horror movies that go “quiet…quiet…quiet…BANG!”  The original 1920s setting (and the 1890s Victorian Britain setting) worked so well because you can still have that gothic horror element that is core to the game.  The 1920s works particularly well as a time to set the game because it’s a world recovering from a global catastrophe, it’s a time of great scientific and engineering leaps forward but is hasn’t shaken off some of the 19th Century trappings, a time of social change and young people partying and setting a trend for rebellious youth and it can get downright creepy even without the mythos aspects.
I’ll refer you to one specific crime that illustrates the often disturbing side of the 1920s and which provides a kind of real life monster and creeping horror in everyday life. Search for the Wineville Chicken Coup Murders and Gordon Northcott http://chickenmurders.blogspot.co.uk/. There’s a lot of detail to the crime and plenty of photos of the crime scene and the murderer himself.  It’s even been made into a film called “Changeling”.  At once you’ll see an event and photos of it that seem recognisable and yet distant.  This is the world that Call of Cthulhu is set in and why, for me, it’s the best.

I liked the 1890s material but that setting is the one that Sherlock Holmes and his shadow threatens to overcome Lovecraft’s tales of unspeakable horror and insanity, of a world alone against great madness. Then there was a supplement that looked at the Cthulhu mythos in the Great War; more appropriate but the real, human inflicted horror should dominate.  Finally and most recently there’s a new supplement and even a new version of the game:  Achtung Cthulhu, the World War 2 setting.  It’s here I have the biggest problem with the direction the game is going.

Achtung Cthulhu plays to the sub-genre of gaming dubbed “Weird War II”. In it, the Nazis are portrayed in the crypto-scientific and the search for strange magic stereotype that may have a basis in reality, but in fact was a very minor part of the whole regime.   There are moments in Achtung Cthulhu which nod, not towards H.P. Lovecraft, but to the range of exploitation movies made in Europe from the 1960s onwards (and to which Iron Sky owes so much); it’s hard not to think of the Australian comedy show “Danger 5” when playing this as well.  A range of miniatures has been released to accompany Achtung Cthulhu as well and, again, they seem to refer to more pulp and exploitation movies than arcane horror.  The American G.I. figures look like Sergeant Rock and the Nazi figures bear more than a passing resemblance to the Indiana Jones movies.  Indy and Lovecraft’s stories might be set at roughly the same time, they both involve mystical artefacts but that’s where the similarity ends.  In many games the presence of miniature figures usually enhances a game, but I feel that Call of Cthulhu is an exception.  The original game came with cardboard counters that had the silhouettes of the monsters which gave a sense of what they might look like, but crucially left out the detail in order to let the imagination conjure up the rest.  Once you’ve put the nicely painted model on the table, you’ve depicted it and the horror is diminished; the same principle applies to horror movies.

Back to Acthung Cthulhu, it is still immensely playable and fun and a good time can be had by all….but it’s a far cry from the game that created a foreboding sense of fear and doom. Call of Cthulhu has become knowable and fun instead of scary and entertaining.  There’s a thin line between what makes us laugh and what frightens us and the game is edging towards the former.  But maybe Achtung Cthulhu is a ploy to lull us into a false sense of security before Chaosium launches a full on gothic and frightening new version of it?