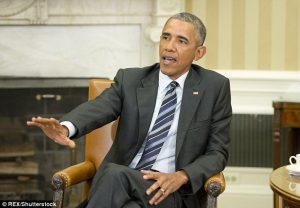 “I’ve expelled several Russian diplomats, issued a vague threat about retaliation ‘in a time of our choosing’ and conflated cyber attacks with military ones as part of the World War Three gift package for Donald…he’s welcome to use it any time although I’d recommend really soon whilst my threats are still fresh.”

“War With Russia; a game for two players, is more like a package of raw ingredients which Donald and his team will have to assemble in their own way” continued the self-proclaimed foreign policy expert.  “Had I…erm, I mean my chosen successor Hillary Clinton…spent another term, I mean…a first term…in office we would have put together our own pretext for war but as part of my long standing bi-partisan approach to politics (it says here) I’m giving it all to president-elect Trump to clinch the deal.  You’re welcome, Donald.”

However president-elect Trump said that President Obama needn’t have been so generous and a nice tie or set of cufflinks would have been enough for him.  However, in Moscow, President Putin said that the War With Russia game was full of design flaws with outdated game design concepts and that he’s more into the latest past-time:  Bamboozle America ’17, from EA Sports.