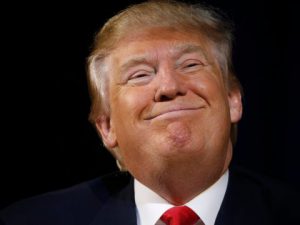 WASHINGTON D.C……NOW!  The world’s journalists are having crisis talks this evening to sort out a word ending in “-gate” to describe the allegations that president elect Donald Trump did in a Russian hotel room.  The various contenders so far have been “Trumpgate” (boring, and used for the recording of him talking lewdly on a coach during the election campaign), “Russiagate” (too vague) and “Pissing-on-the-bed-gate” but none have been deemed catchy or descriptive enough to satisfy news editors.

“If we don’t sort this crisis out soon it’s going to hit news agencies hard” said David Blarney, the head of the American Reporters Society Editorial; the body responsible for overseeing clichéd headlines and straplines.  “All political scandals have had “-gate” attached to them since 1972 and if we don’t come up with something soon news editors the world over won’t have a snappy, lazy, facile and idiotic term to use as a shortcut.  It’s up to us, the world’s news media, to sort this problem out before people start actually paying attention in depth to the story.”

A lobby of journalists, mainly from new media and online sites such as Buzzfeed and the Huffington Post are said to favour “Pissgate” but that has been met with hostility from the main U.S. networks who must cater for more family oriented audiences.  The BBC have proposed “Lewdgate” but MSNBC have vetoed that as it sounds like an actual place name to them.

The origin of the suffix -gate, believed to date back more than 40 years, derived from a political scandal that has been lost in the midst of time.  “I think it was about an old timey political scandal” said Blarney.  “Kennedy, I think…or it may have been the guy before him….anyway, it’s the law that we have to use -gate with every scandal…I think it’s the law.  Anyway, to not do it is to fall behind the other networks and news agencies and seem out of step with them and that can’t happen.  We think and act as one; except Breitbart but they’re not proper news anyway.  What about Urinegate?  No?”

Talks are set to last all weekend but for now the unofficial title for this story is “Trump pays Russian whores to piss on A Bed-gate” until a solution is found.