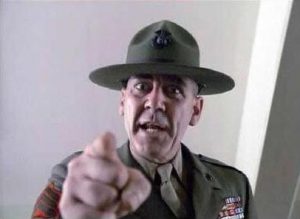 He described Dan Matthews, a 21 year old media studies student from New York, as “looking like the kind of numbnuts that could suck a golf ball up a garden hose!” and Angelo Laporte, 25, a part time blogger from South London as “the kind that would fuck a man in the ass and not give him the common courtesy of a reach around!”

Any attempts to counter-argue him were met with more abuse, innuendo of a sexual nature and demands to drop to the ground and give him twenty. Yesterday Hartman tweeted to Ghostbuster’s star Leslie Jones that “I didn’t know they could stack shit that high!” which prompted Jones to file an official complaint to Twitter and led to the immediate suspension of Hartman’s account.

Elsewhere a video on YouTube of Hartman leading a group of recruits in their underwear, clutching their genitals and singing a song about rifles and guns was demonitised as it breached YouTube’s “controversial subject matter” rules.

Free speech advocates and libertarians are outraged at Twitter’s and YouTube’s actions. Spokesman Stathis Pantellis said on his blog “this is unacceptable in a free and democratic society.  Hartman is not trolling, he’s shitposting and it’s all done to toughen recruits up, form an elite unit and desensitise them to combat.  It’s all part of a routine and not a campaign of hate his critics would have you believe.”

However, the political commentator Crunk Uhruhraghr from the online channel “The Outraged Ottomans” said that no one he trolled was a US Marine recruit and that he had no right to subject liberal arts students on Twitter to cyberbullying.