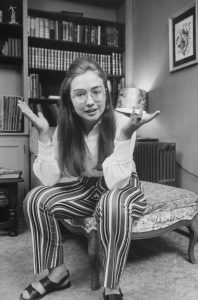 The image sent her ratings down sharply, whilst support for Donald Trump in the polls received a boost as millions of Americans recoiled in horror at the image of the stripy trousers.

“We were following up on new evidence about Secretary Clinton’s emails” said F.B.I. director Comey, “when we discovered a photo from around 1970 showing Mrs Clinton wearing pants that would certainly incriminate her in a crime against aesthetics.”

The Republican party was quick to condemn Mrs Clinton’s youthful fashion sense and sought to draw comparisons to her sartorial choices now.  Mark Biva of Republicans For All Round Good Taste said “this is beyond bad taste; even taking into account that photo being taken in 1970, these are pants that not even Laurie Partridge out of the Partridge Family would ever be caught dead in.  You have to question the judgement of anyone who would wear them…or Chinese style boiler suits which she seems to favour these days.  Ugh…the way the stripes direct your gaze automatically to the crotch diamond….the horror!”

Fashion Defence expert Martin McCloggheghey sounded a note of warning:  “In the worst case scenario, if Secretary Clinton were to become President, she could deploy those pants in under two minutes and there’s nothing that Congress, the Vice President and the Joint Chiefs of Staff could prevent.  This is what we call a ‘Rogue Pants Scenario’.

Secretary Clinton referred to the trousers in a speech she gave in New York this morning.  “Any sniggering, mockery or eyeball rolling at this photo by Russia will be seen as a military attack on the United States.”