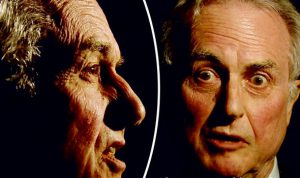 OXFORD…..NOW!  Prominent evolutionary biologist and leading anti-theist, Richard Dawkins, has finished his long awaited sequel to his 2006 international best seller “The God Delusion” which is entitled “The Dawkins Delusion”.  In this latest work, Dawkins describes the process of devolution by describing in detail how he went from being the foremost evolution expert in the world to a smug, pompous twat who courts publicity and controversy on a variety of subjects he’s not qualified to speak on with authority.

“Many live believing the lie that opinionated idiots are born or just come into being.  They are not; they are the product of years of nurturing that sees them develop from a primitive, single brain celled organism called a ‘pseudo-intellectual’ who once had some good and sound points to make in a subject they are an authority on but who, over time and being exposed to outside influences develop into a complete twat.” Professor Dawkins said at the book’s launch.

In his book Dawkins goes on to explain how the pseud achieves initial success which in turn exposes them to the media who feed the ego through praise and over-exposure.  “Once the pseud gains fame, they are driven by devolutionary forces which makes them make more and more outrageous and idiotic statements in order to keep their fame going, such as likening a baptism or Sunday School at your local parish church to child abuse or hurling abuse at voters because they didn’t support remaining in the E.U.”

Once past the idiotic public statement phase, the devolutionary process next involves the Pseud developing a hard carapace that renders them immune to criticism and self-awareness.  “Anyone who disagrees with me is not only wrong, they are mentally deficient as well” said Dawkins, offering up an example from his own mindset.

“Finally the Pseud gets too big for his home and chosen subject and ventures forth to spout nonsense about things they are barely qualified to speak about, trusting in their fame in other areas and an unshakeable belief that because they’re a university professor with their own book, TV and newspaper column deal they can talk about any subject under the sun even if they know jack all about it.  Brexit voters are idiotic scum who are going to kill the United Kingdom and they’re probably all Christian lunatics as well.” He said.

Other indicators of mental devolution are a large, parasitic infestation of ‘fans’ on social media, who lap up and regurgitate the inane pronouncements of the ‘leader’.  Brain paralysis in these fans is, sadly, almost immediate with the mis-named Richard Dawkins Foundation for Reason and Science which has, time and again, been shown to be neither reasonable or scientific as it promotes memes on religion written by people who have no clue about religion at all but who are believed unswervingly nonetheless.

The Pseud becomes violently unstable and aggressive at this stage if they are ever challenged.  It’s best to avoid someone in this state as they can lash out at any time in any way, safety experts have said.  Symptoms include typing in caps lock, straw man arguments and failing to see an opponent as even human.

Dawkins admitted he used himself as a test subject.  “I wanted to see what would happen to a once highly intelligent person if they existed in their own confirmation bubble, got angry with those who disagreed with them and revelled in their own ignorance of complex subjects.  I put myself in the petrie dish, so to speak, right next to someone who just wanted to get on with life and be nice to all kinds of people to see the differences and after a decade now, I’m a deluded twat”.

The Dawkins Delusion is available at all good bookshops and on e-readers from Friday.