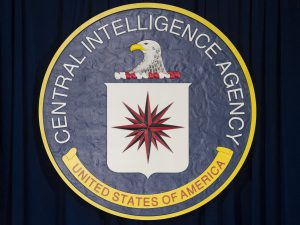 WASHINGTON D.C……NOW!  America’s intelligence agency, the CIA have vehemently denied that they are a fake spy agency which should be shut down.  “We are definitely real!” said spokesperson Verity Sharpe.  “We are a bone fide intelligence gathering and security agency doing valuable work in defending America’s interests and NOT, I repeat not, pretending at doing spy stuff and lounging around like a bunch of sitcom writers dreaming up improbable plots.”

When it was pointed out that a number of current CIA staff had held jobs as scriptwriters for daytime soap operas, Sharpe made a point of clarifying the situation.  “Yes, we have employed various movie and television technicians over the years but that’s a long established tradition at the CIA.  We hired producers to come up with a fake cover story to get hostages out of Tehran, we’ve used top Hollywood special effects technicians to create convincing diversions, disguises and gadgets for our agents and, yes, we’ve employed a team of soap opera writers to sift through data, analyse potential threats and liaise with our counterparts at M.I.6 and other international spy agencies.”

Fake spy agencies have been accused of influencing elections, undermining confidence in various governments around the world, planting people close to power using phoney credentials and hacking into phones, emails and computers.  Experts say they present a growing problem to the genuine spy agencies and that the public no longer know who to trust when it comes to things they really don’t want to know about.

With growing concern of the power of fake spy agencies in informing public opinion the question now is which are the real agencies and which are the fake ones.  British defence and intelligence expert Mark Gurney has produced a list of which he considers 100% accurate.  “We’ve known for years that the CIA are a bunch of fakers but it doesn’t stop there.  M.I.5 are devious fakers, the Deuxieme Bureau are stupid fakers, the FBI are load of faking cant’s and the hardest fakers are the Russians, always have been.  Big ugly fakers.”  At least, that’s what we thought he said, the phone line was poor.

In the meantime the CIA have stuck to their guns.  “We’re real alright…of course at this stage it’s unverified but we have it on good authority that we’re actually a real spy agency.”