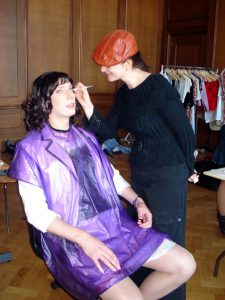 The changes were all planned in intricate detail by Burbage and his support team: Time keeper Chris Wadd, make up artist Cheryl Burbage and his stylist, Flambelle.  Burbage would declare which gender identity he would be, make the appropriate costume and style alterations and then appear in a short video with him in the role for verification purposes.  A large, hand-drawn chart was used to keep the team on schedule.

“I got off to a great start, which really helped” said Burbage in between identities. “We planned things so that the changes to me would be incremental” he added.  “The biggest leap was between transgender male who identifies as female but presents as male to cisgender male who identifies as male but presents as female because I had to quickly change all my clothes and I had troubles with a tricky bra strap.  Chris was really egging me to get a move on and I tried to focus on the advice Flambelle gave me beforehand and feel for the hooks at the back.”

“We were back on track but after a while I found myself getting confused as who I was supposed to be at any given time and in mid-change I think we may have accidentally discovered two new gender identities, but thank goodness we had the chart to tell me what I was going to be next.” But there were limits to what he and his team could achieve.  “There’s a barrier I hit late on” said Gary “I had achieved transgender male who identified and presented as female but to go to the next level would mean cutting my balls off.  So I had to call it a day at 17 gender identities achieved but, still, that’s a world record.”

Gary’s record is safe for the moment but already there’s a word from a German team that are confident they can break it and are aiming for 21 genders.   “I hear they’re going to be using a hospital as a base of operations and that the last identity will probably be permanent.  I think our achievement was more special because we used my flat.” He added.

When asked if this stunt was demeaning to transgendered people, Burbage responded “but I set a world record!”