A HISTORY OF MY WORLD IN 100 OBJECTS:

The Phaser, weapon of the future. You can stun with it. 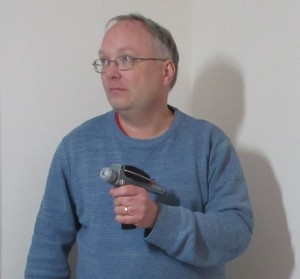 I bought this “toy” back in the 1990s and I have to say as far as children’s playthings go, it looks very realistic and adult sized…as if the target purchasers weren’t aged between 8-14.

I remember getting this phaser for a science fiction fancy dress party I had been invited to and decided to go as someone from Star Trek. I bought it and borrowed a gold coloured Star Trek uniform shirt, I had the black trousers and boots and I also borrowed a full sized replica Star Trek communicator. So I was in the pukka gear and went along, wondering who else had decided on a Star Trek inspired costume, half hoping there was a girl there in the appropriate Star Fleet uniform.

The answer was, just me. I learned two things that night that I hitherto didn’t know before: This party was being hosted by a group of girls from New Zealand and that country is where Star Trek goes to die. I was there, at the party, wearing the gold shirt with the USS Enterprise logo on it, I had the phaser and communicator, two instantly recognisable props from the show and I was asked “so who have you come as?” by the antipodeans. “Star Trek” I replied. “Oh, that. Never seen it. We had Star Trek in New Zealand, but it wasn’t very popular”. Nor was any other science fiction movie or TV show, it seemed, as most people not from the UK there that night decided that a rainbow coloured wig, a black turtleneck sweater and Deeley Boppers constituted a sci-fi costume which begged the question why throw a sci-fi themed party if most of the guests, or the hosts, have no idea what that is?

I also learned what the worst chat up line in human history is as well. Some are funny, corny, sweet or downright offensive but mine produced a reaction of pure inertia, a void into which no human emotion could survive. I was chatting to a girl, a nice one, and I pointed my phaser at her and said “I’m going to have to stun you”. The only thing that got stunned right there was my self-esteem. Don’t get me wrong, it was a good party overall but I felt like I had made a faux pas by having a costume that was too accurate.

It all ended when a latecomer said to me “Have you come along as Dr Spock?” and I replied “Actually, it was Mr Spock, not Doctor, and I’m wearing a gold command shirt whereas Spock wore a blue for sciences one…I’ll get my coat.” 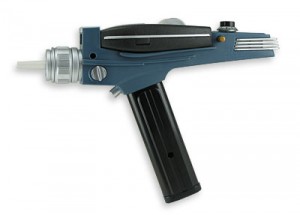 Let’s turn our attention back to the item itself. My replica is a very accurate representation of what was actually used in the show. Looking at it, I can see why it’s become a design classic: It looks both functional and yet futuristic….albeit that it’s got retro-60s sci fi curves and styling but the practicality of the prop is evident. It was very well thought out: A small, palm sized phaser plugs into the top of the pistol grip presumably to provide it with greater range or power. Apparently the show’s creator, Gene Roddenberry, didn’t want a pistol design at all and preferred the little boxes but it was pointed out that the little boxes couldn’t be seen so clearly on screen so the pistol design came in. The art department, were right in my opinion because it gives the prop an extra level of detail that is actually relevant to its use. The pistol has dials and a thumbwheel with numbers on it to indicate power level: It wasn’t just stun or kill, the thing could heat rocks and be used as a cutting torch.

The phaser prop gives a clue as to why Star Trek, the original series, has endured as an entertainment phenomenon. The details of how this device would work in the show were there, well thought out and form followed function. You widen that to include the other iconic props: The Tricorder, the transporter, the bridge, the little hand held medical scanners…The writers thought about the items, how they would work, then the art department would create something functional based around those ideas and sometimes put in ideas of their own. When I compare this to the ones used in the later movies, and in particular the two recent JJ Abrams produced ones, what I see is something that should be simple and yet is overdesigned. The latest one looks both clunky, gaudy and has functions that don’t make a whole lot of sense; such as a feature that shows your enemy whether you’ve set it to stun or kill.

I’ve done a bit of prop building myself; taking left over bits of junk, broken toys and non-functioning electrical devices and re-fashioned them into something else. In each case, I thought about the function first, looked for the bits that would suit that function and then build the items without thinking what would look cool.

It’s a good way to go about coming up with futuristic or fantasy props: What is it? What’s it designed to do? How does it work? How easy would it be for the characters to use? Is it efficient? All these things must rank higher than whether it looks cool or not because if something, like the original phaser, looks practical and efficient, it ends up being cool anyway.