The sporting movie, a familiar story to most of us. From “Pride of the Yankees” to “Major League 2” via the “Arsenal Stadium Mystery” and “Escape to Victory” the sporting movie shows us the triumphs, the defeats, the underdogs and the roar of the crowd….and they’re usually clichéd and a bit rubbish to be frank. Much as I like a good Kevin Costner sports movie now and again, sports movies have a feeling of déjà vu about them plus it seems like no one involved in the movie business has ever seen a real sports event by the way they’re depicted on screen.
However, one sporting movie stands above them all and it’s by far my favourite. It defies the genre rather than defining it and it still has something to tell us about sports and those who play them.

Ladies and Gedderbong, I give you… 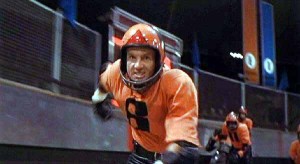 OK, I mean the 1975 version with James Caan here…and by James Caan I mean the actor who was in The Godfather and Freebie and the Bean rather than the grumpy millionaire from Dragon’s Den. Oh why do they have to remake things or have two famous people with the same name all the time?

Anyway, for the uninitiated, Rollerball is set in the near-ish future where the world lives at peace and corporations have replaced nation states. To pacify the population, the sport of Rollerball has been devised. It’s a full on contact sport played by teams rollerskating around an oval track trying to score goals with a steel ball. You’re allowed to hit, kick, and generally beat the crap out of your opponent and sometimes there are maimings and deaths. One star Rollerball player is being forced to retire before he becomes too much of a cult hero to the people and he starts to question society and the way it’s run. So here are my reasons why Rollerball is the best sports movie of all time.

WHO CARES IF THE ACTORS CAN’T PLAY AND THE PLAYERS CAN’T ACT?

A common complaint about sports movies is that actors are rubbish at the sporting stuff and real life sports people cast loosely as themselves can’t act (I refer you to “Escape to Victory”). Rollerball avoids this by inventing a sport that isn’t played in the real world. Without real life examples, what the actors do in the movie is the benchmark Rollerball performance and because there’s no real Rollerballers you don’t have to cast monosyllabic jocks in supporting roles.

IT’S A PROPER GAME, WITH RULES AND EVERYTHING

Cleverly, the production team on Rollerball devised the rules, tactics and how the game should be played. A lot of that was worked out with the actors and stunt teams during production but what you see on screen has clearly defined rules and a system of play. We see a match being played according to the rules early on, then as we see other matches the rules change as the Corporations seek to see the star player (Jonathan) defeated. This is all consistent and you don’t have to be an expert in a sport to either know some obscure rule reference or else have the writers pull a crap idea out of their asses. So we’re spared the point to the scoreboard antics of “The Natural”, the blatant cheating and obscure rules referencing of “The Bad News Bears” and the no one in their right mind would do something stupid yet noble, such as the behaviour of Kevin Costner in “Tin Cup”.

NO UNDERDOGS OR RAGS TO RICHES STORY

Most, if not all, sports movies feature a talented underdog who must rise up against the sporting system and beat the odds to win. The crowd are won over and go wild. Rollerball dispenses with this cliché and presents us with a character who is the greatest player in the world and whose team are the World Champions. And yet we root for him! Why? Because he’s an underdog in other ways. This is a man who has won the admiration of the world by being the best, but the system now wants him out. Instead of manipulating the system and finding that “can do” team spirit in order to win, he asks the pertinent questions of society from a position of being World Champion.

A typical sports movie will cast the antagonists as a rival professional or team; they’re always well funded, better organised and strut about like proud Peacocks. Yet their pride will lead to their downfall against the scruffy but loveable underdogs.

The rivals in “Rollerball” are just instruments of a bigger villain: Those who devised and run the sport itself. No one in “The Mighty Ducks” or “Bad News Bears” or “On Any Given Sunday” suggests that sport itself might be corrupting and wrong, only those who don’t play it fairly or with great heart yet Rollerball suggests that sport is the pacifier and distractor of people’s attentions, that as crowds demand more action, more aggression and more tribalism then the sport becomes tainted and corrupt. The critical spotlight is on the sport rather than the snooty kids.

CORPORATE MEDDLING IN SPORT
A massive corporation, who owns a sports team, wants rules changed at its behest, manipulates the sport itself for its own gain and to hell with the fans. Sound familiar? This is at the heart of the movie and the history of all major team sports has seen the same thing happen. The sport becomes a tool of corporations, rather than an entity of its own.

Our hero doesn’t want to end the game of Rollerball; he loves it too much, but he has made an artform out of it by the tough but fair way he plays it. He commands the respect of the crowds and fellow players and gives the game, whose sole purpose was to show the public the futility of individual effort, meaning and nobility. The final game is designed purely to kill Jonathan and is a complete bloodbath; as everyone else is either dead or too injured to continue, but he withstands it all and is the last man standing. Now, refusing to kill the last New York player, he scores the only goal of the game: He has reminded the world that Rollerball is a sport, it should have rules, it should be fair, that you can excel and be the best if you’re good enough and that you don’t have to be a brute and a cheat to do so. He has taken a gladiatorial game of violence and turned it into a game of skill.

Rollerball is about a sport but it’s so much more and it doesn’t resort to cliché. As such, you can come to the movie without having the baggage of the genre to deal with. 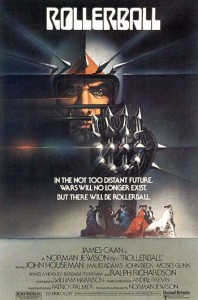 Rollerball and all associated images is copyright MGM/UA.