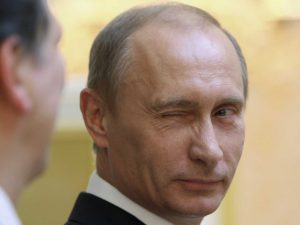 That nasty coldy-fluey bug that’s been going around your kids’ school and at your work has been blamed on Russian hackers, it has been claimed.  Labour MP Jess Fricker said in an interview that “I’m fairly certain that horrible, head cold and runny poo that’s not quite diarrhoea and which half of us have come down with this week can be traced to Russian hackers acting under direct orders from Vladimir Putin.”

Gurn Knappers, a leading member of the pro-EU think tank “Authoritas”, says that not only is Russia trying to undermine the West by spreading a nasty coldy-flu bug around our schools and places of work, but that it’s also responsible for the recent fog over much of South-East England and the slightly stronger winds in the North-West.  “Colds, poor weather, your car using up a little too much windscreen wiper fluid than normal…all Russia’s doing.”

Evidence that links Russia directly with these irritations is non-existent at the moment “but it’s obvious when you think about it” says Fricker.  “I mean, bad things happen, bad things that shouldn’t happen, Russia…join the dots, sheeple” she said, raising her eyebrows in a conspiratorial way.

In the United States President Obama was firm in what the West’s response should be.  “Nasty tummy bugs, inclement weather, never having enough AA sized batteries when you need them and having too many coathangers….we will meet all these Russian attempts to interfere with our lives with a full military response!”

President Obama went on to say that Russian involvement in the death of 99 year old Hungarian star Zsa Zsa Gabor cannot be ruled out at this stage but he added “all those celebrity deaths this year?  All in one year?  And it’s all the people you like?  Russia?  R-U-S-S-I-A.  Think about it” he said, tapping the side of his head.