A HISTORY OF MY WORLD IN 100 OBJECTS

This mug has special significance for me in many ways. I’ve never drunk out of it and it’s never had any liquids poured into it. It’s value is a reminder of people I’ve met, chances I’ve taken, daft things I’ve done and the consequences of followed on from it.

You may have already guessed what Pike’s Peak refers to: It’s a mountain in Colorado, USA, and it’s the only mountain I’ve ever climbed. I say “climbed”, I actually drove up it. Correction, someone else drove, I sat in the front passenger seat. But I reached the summit, all 14,110 feet of it. No matter how I got there, I got to experience what mountaineers have in that the air is very thin and that you feel, looking down, like you’re on the roof of the world.

However, the romanticism of reaching the summit of a 14,000 foot tall mountain was dispelled by the fact that there’s a gift shop up there. That’s where I bought the mug.

The story of how I got to be in a gift shop on top of a mountain in Colorado is one of my more Byzantine and uplifting moments of my life. Basically, in 2004, I was in a rut. Work was meh, my social life was meh meh and my dating life had just imploded….again. In short, I had a toehold on work, few friends, no girlfriend and with a few people writing off my chances of achieving anything…which they kindly told to my face. Out of desperation, I ended up on the internet. The good ol’ internet 1.0 with dial-up, clunky block style chatrooms and…well, chatrooms. So I was on one and met this guy…I didn’t want to meet him, he wasn’t a cute girl, he lived in the USA, he lived in the middle of nowhere in the USA and he was a pleasant chap to correspond with. His name’s Steve, by the way. Anyway, he invited me to visit his own website: and I checked it out because, hey, my social life was on life support.

So I met his friends online, and they’re all gee whizz and just swell and full of American good nature and cheer and I liked these guys. And girls. They were the best example of an online community I had ever found I spent more and more time chewing the fat and firing off zinging British humour at them.

Anyway, it turns out they hold an annual get together and in 2004 they wanted me to attend. Well, work had bottomed out for me at that time and I didn’t know where the next job was coming from. Naturally I gave my apologies and said I couldn’t attend. I didn’t count on what happened next, though: They started a fund drive, project “Ship A Brit”. They actually raised the money for my air fare! What kind of cult were these people? They wanted ME! If I accepted then it was a future of wearing a robe, giving what I had left to “The Guru” and finally being gunned down by the FBI before the suicide pill kicked in. But what if it wasn’t like that? What if these people were genuine and they just wanted me to visit for a week and hang out? So I took the plunge, I took the money and flew to Colorado.

Top tip here; never banter with US customs officials. Even if they are attractive. I barely escaped a full cavity search.

I was met by Steve and another friend, the one behind the plan to drag me over to America, Kelly. I put my safety in their hands but on the plus side they looked exactly like their online photos which was a crumb of comfort before they carted me off to meet the rest of “the family”.

But I needn’t have worried; the Colorado posse were all wonderful people…see? 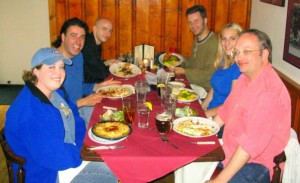 I had a terrific time in Manitou Springs, where Steve was based, and in you’re in Manitou then Pike’s Peak is right next door. So, natch, we climbed in…in Kelly’s car.

Now at this juncture of the story I should point out that in my desperate, pre-Colorado, state I had been flirting with the idea of taking up Extreme Ironing. Looking back, I suspect the whole thing was a scam but at the time I thought the idea of going to some extreme location, like a mountain, and doing your ironing there sounded appealing and so Steve, Kelly and the gang goaded me into doing it. So yes, I ended up ironing a jacket at 14,110 feet. 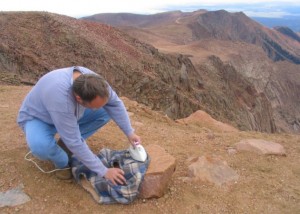 I got talking to a mountain ranger up there and he was looking at me askance about what I was doing with an iron up a mountain so I told him. He didn’t look fazed but instead told me the story about the man who once pushed a peanut up Pike’s Peak with his nose. So I hadn’t done the oddest thing on that mountain then.

It was all a wonderful time and when I got back to the UK, things changed: I got a free ticket to see “Rush”, I got more work and…most importantly, Laura (Wifey) came into my life. There was no looking back.

So there you go; proof that meeting people online can be uplifting and encouraging. And if people who visit my house see my sliver mug up on the special mug shelf (yes, we have one), then I can tell them my story before telling them firmly that no, you can’t drink out of it.