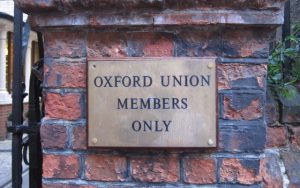 The student’s union of Oxford University has declared that all students must use gender neutral pronouns such as “ze” and “zhey” when referring to each other, even if it does make the speaker sound like a stereotypical German baddie from a war movie.

Keith-Sophie Henderson, a spokesperson for the Union, explained how the New Order will work.  “All speakers must…I SAY MUST…introduce zhemselves in a gender neutral pronoun before speaking.  Zhey must not even use zheir names!” zhey said before coming to attention and clicking zheir heels together.

“You see, Major…oh, I’m sorry, I meant Ms…” continued Henderson, who studies media and gender studies at the once-great university, “you zee, ve at ze Student’s Union are not all barbarians as you vould think.  ZIS IZ ALLIED PROPAGANDA!  Erm, I mean it’s fake news, not allied, I don’t know vhy I zaid zat.”

Henderson paused to put a monocle in their eye and then started striding around the room with their hands behind their back.  “Ve vant students of diverse backgrounds to feel that they have ‘living space’ on campus and zat can only be achieved by driving back ze reactionary forces zat oppose us!  Only by controlling ze vay people talk can ve truly have a free and open society…STOP LAUGHING OR I VILL HAVE YOU SHOT!  Erm, not shot, I mean, no-platformed.  Oh, zere ist my friend, Sigourney across ze quad…I vill wave to zhem…Siggy!  Hail zhere!  Sig…hail!  Sig hail!  Now, vhere vas I?  Oh yes, so everyone must use ze vord ze in ze future und those who don’t will feel the force of ze glorious union as ve crush them!  By no platforming them…erm, I mean, zhem,, having zhem removed from campus und other sanctions we vill dream up.”

The Man In The High Castle series 2 will be available to watch on Amazon Prime on Friday 16th December.