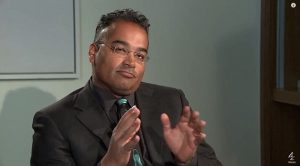 In an interview with Channel 4 news, backbench MP Jonathan Norman said that the current crisis was complicated and “needed to be examined from various standpoints, like a prism”.  Channel 4 news host, Krishnan Guru-Murthy, latched onto the prism remark and commented that prisms don’t work that way and questioned whether Mr Norman even knew what one was.  Mr Norman, surprised by the question, began to flounder saying he was basically aware of what a prism was and had learned about them at school but that was not as important as the current crisis which, he reiterated, needed to be examined in more detail.

“But a prism won’t help you do that, Mr Norman” Guru-Murthy countered.

“I never said it did” replied Norman.

“You did.  You’re on record saying we needed to view the issue through a prism but a prism can only refract light or create duplicates of an image when viewed from the correct angle, quite different from what you’re saying.  Is this now official party policy?  Are you going to stand by your remarks?”

At this point Mr Norman looked to the studio for some kind of way out.

The incident, widely reported in today’s press as “Prismgate”, was followed up on the Today Programme on Radio 4.  In a heated exchange, John Humphrys grilled the party chief whip on whether Mr Norman should be officially sanctioned for his comments.  On Radio 5 Live’s Breakfast phone in, many callers were emotional as they shared their thoughts and experiences.  Lucinda Cress from Greenwich said that Mr Norman should be “sacked and reported to the police.  My brother works at a family science centre in Chichester and prisms are an important part of the light show demonstration they do there.  For Mr Norman to utter such nonsense about a subject he clearly knows nothing about is an indictment on our whole political system.”  Meanwhile Neil Vass of the National Prism Association has called for Mr Norman’s immediate internment without trial for “wilful abuse of hundreds of millions of prisms, prism makers and prism users in this country”.

Members of other parties have joined in the calls for Mr Norman to be sacked and for a by-election in his constituency and the Times columnist Giles Coren has commented in the paper that people should be barred from elected office if they don’t have a basic grasp of Newtonian physics and Euclidian geometry.

Mr Norman, in a prepared statement, said he regretted misusing the word prism and that he wished everyone could return to focussing on the important crisis that prompted his initial remarks.  He again stressed that the issue was complicated and needed the input from two different sides…like a two way mirror.