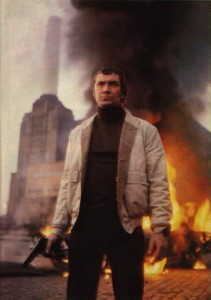 “The Professionals” wasn’t a kid’s show, and it went out usually on a Saturday night about 9pm. But it was a special treat that your parents would let you watch if you were good. Quite why parents felt benevolent in letting their sons watch 1 hour of chauvanism and violence which would only be replicated in the school playground on Monday is a slight mystery until you worked out that the mothers were all pining for Lewis Collins. Talk about a show that had something for everyone.

For Gordon Jackson playing the gruff and businesslike George Cowley, it was a chance to shed his uptight and dutiful image of Hudson, the butler in “Upstairs Downstairs” that he had brilliantly cultivated. For Martin Shaw playing Ray Doyle, “The Professionals” was just another phase in a varied career he had mapped out for himself early on: “Do provincial theatre, check. Do a Polanski Shakespeare adaptation, check. Do action TV series, check. Do maverick social drama with a left wing tinge, check….” For Lewis Collins playing Bodie (it was always one name with him), it was everything and he threw himself into a personal macho male fantasy with brutal intensity.

Although if you had been following his career up to that point, you’d have never guessed that he was an Action Man doll come to life. A Liverpudlian who had gigged in Merseybeat bands, he rose to prominence in musical theatre as a song and dance man as evidenced in a one off ITV musical called…erm… “Must Wear Tights”. Seriously. Space precludes going into just why in the name of all things holy the show was called that but that’s what brought our Lewis into the public eye. Then came nice, cheery sitcom “The Cuckoo Waltz” with Dianne Keen where he played a slightly roguish but loveable next door neighbour. 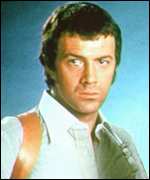 It wasn’t until he guessed starred in an episode of “The New Avengers” that his action credentials started to be stirred. He played a guest villain, working alongside his eventual “Professionals” co-star Martin Shaw. In a wonderful bit of entertainment hindsight, there’s a scene in where Collins’ and Shaw’s evil plan is about to go into action and one turns to the other and says “we should work together again, we make a good team”.

Was this a moment where the producers were winking at the audience saying “you like these guys now, but just wait until they get their own show!”? No, apparently not because first choice for Bodie was fellow Flare Player Anthony Andrews. Andrews turned it down which allowed the Beast to be unleashed.

In tandem with his all-action on screen persona, Collins seemed to live the same life away from the set. He joined the Territorial Army and even took extra training to qualify for the SAS. Not only that, he succeeded only to be turned down because of his celebrity status. He’s a qualified pilot as well and is a crack shot at sport shooting. A friend of mine tried skydiving a few years ago and found Lewis Collins sitting opposite him in the plane; only he was going higher to try a free fall parachute jump. This wasn’t an actor who couldn’t wait for the words “Cut…and OK Lewis, take 5 while we get your stunt double in”, this was a balls to the wall thrill junkie who just happened to act in between dangerous stunts.

Collins developed an acting style to match the action: Furrowed brow, clenched jaw and lots of huffing and puffing as he psyched himself up to take out the bad guy of the week. Doyle may have had deep moral crises in the show, Bodie just brooded. He was also a big kid who, when the mission had relaxed a bit, could make infantile jokes and follow beautiful girls around the room like a love sick puppy. But at the end of the day, he was still the bad boy and we counted down the minutes until he had to shoot something again.

The show was massive around the world…except America…and in 1981 it got suddenly and unceremoniously cancelled. Audiences couldn’t fathom why “The Professionals” suddenly stopped but ITV had its reasons and that was the backlash over the levels of violence on our screens. Both the BBC and ITV had been upping the ante in sex and violence over the previous 15 years and was now in a stare out contest with Mary Whitehouses’ National Viewers And Listeners Association and the TV networks blinked first. Of course, they put a positive spin on it…claiming it was moving forwards and away from testosterone fuelled action shows. “The Professionals”, “Target” and “The Sweeney” were out, “Shoestring” and “Bergerac” were in and the whole pacification of TV drama was completed with “Inspector Morse”. Cop shows had been neutered.

But what of Lewis Collins, TV’s ultimate action hero? He stepped straight into a movie based on the real life hostage crisis in the Iranian embassy in London. The movie was “Who Dares Wins”, Collins was to play an SAS officer (and they didn’t have to spend money on his training) and the whole thing was to be overseen by the same production crew from “The Professionals”. That the result was lacklustre compared to what we’d been watching on the TV wasn’t Lewis’ fault. He was tough, macho and appealing but the pacing and script was flat and it showed badly in the final edit.

“Who Dares Wins” came out during another breakdown in contract talks between Roger Moore and Cubby Broccoli after “For Your Eyes Only”. Despite its flaws, it was Collins’ calling card for the role of James Bond but Broccoli wasn’t impressed and Moore kept his job. The new bosses of British TV didn’t want Lewis Collins back either. There were no more action shows being made and Collins, who might have harboured hopes for a Bond recall, probably didn’t want to go back to mildly amusing sitcoms either. He sought action roles, and found them in a series of horrible direct to video European co-productions: His standard role was as a mercenary, ex-SAS or something similar, going into some fictional African or Eastern European country and blowing it up. Even the action wasn’t as good as in “The Professionals”.

More indignities followed. Martin Shaw, worried that he might get typecast as an action man, decided he wouldn’t allow repeats of “The Professionals” to be shown on TV. He might have seen it as harmful to his career, but to Gordon Jackson the royalties were a pension as his health deteriorated and to Lewis Collins it was still his greatest calling card. Shorn of repeats, the public quickly forgot him.

A few roles in higher profile shows followed in the 80s but not often enough and certainly not with him in the lead. He did the trip out to America, like a lot of his generation did, and got stuck there. Always a man ready for a challenge, he went to the prestigious University of Southern California to study film directing and passed. But no work came from it. A pattern was emerging: Collins would throw himself whole heartedly into various projects and succeed, only to be treated with disdain by the authorities in charge. He lived out the rest of his life in California with his family; even if acting didn’t give him the satisfaction it should have done, he certainly had plenty of interesting hobbies that kept him amused.

For many, including myself, he was the greatest action actor of his generation. For a few short years in the late 70’s, he lived out a fantasy most men can only dream of. Every parent who has despaired of the sight of their sons rolling across the front bonnet of their newly cleaned cars, or had to nurse little grazed knees because little Johnny fell down the stairs whilst pretending to chase a KGB killer has Lewis Collins to blame…or thank, depending on your point of view.