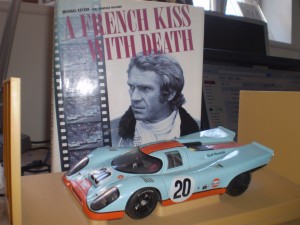 The picture above is a die cast scale model of a Porsche 917, but not just any old 917…Steve McQueen’s 917. That’s important.

My love of motor racing began with a movie; “Le Mans”, starring Steve McQueen. It’s one of the trinity of decent motor racing movies along with “Grand Prix” and “Rush” (“Cars” doesn’t count and the recent documentaries on F1 are very good, but not really dramatic movies in the classic sense). “Le Mans” is a tricky film to assess; you either love it or hate it. It has virtually no plot; a race begins, it goes on for 24 hours and someone wins, hardly any dialogue, the characters are merely the briefest of sketches and it’s about 20 minutes and 6 lines of dialogue before the race actually starts. So what’s the appeal? Well, for one thing it’s Steve McQueen in his element; racing cars and communicating through meaningful stares. The guy just radiates coolness. The second reason is the racing and the cars themselves. Real life footage of the 1970 Le Mans race is intercut seamlessly with staged racing sequences and you’d be hard pressed to tell the difference. The producers even entered a camera car into the real 1970 race to get some authentic racing footage and the actual cars were hired by the movie company to lend even more realism.

Even the Cooler King, McQueen, might not be the true star of the movie because the Porsche 917 in all its glory threatens to overwhelm the whole enterprise.

For the uninitiated, the 917 might be the greatest racing car in history….well, a poll in Motor Sport magazine came to that conclusion…and the movie was fortunate enough to be made at the time of its competitive career. It was a beast of a machine, the most powerful racing car yet seen (and still one of the all-time fastest) and one of the most difficult to control. The first time it raced at Le Mans, it killed its driver on the first lap. The car won half of all races it entered and dominated its era; simply, it was the car to have.

Not only that, it was beautiful to look at. The smooth, sweeping curves and futuristic look made it impressive. It seemed like the kind of car everyone would be driving in the year 2000. The mod-futuristic look, such a Sixties vision of the world of tomorrow, was a quantum leap forwards in terms of racing car design from what went before it. By 1970 it was in its second season as a race car and established as the one to beat, although it had not yet won Le Mans. It had also inspired Ferrari to come up with the 512, the second most beautiful racing car ever designed!

When McQueen and his team went about making Le Mans, they had their leading man drive a 917. This was Steve’s dream role: One where he could drive a car, on celluloid, at 200mph and not have one single producer tell him he can’t for insurance purposes. All footage you see in the movie of Porsche #20 is driven by Steve McQueen and he drives and keeps pace with the professional racing drivers hired for the movie admirably.
The climax of the movie involves a 10 minute, largely wordless scene of the last few laps which are absolutely thrilling to watch. The actors playing the drivers do little more than peep through balaclavas and crash helmets, doing a lot of glancing into rear view mirrors. The cars are centre stage but you get a sense of the personality of the drivers through the way they drive. The sounds are predominantly those of the 12 cylinder engines and they roar like beasts. It must have been amazing to have seen the movie in a cinema with the sound piercing your eardrums.

The movie has stayed with me since the first time I saw it in 1971 and it fuelled (pardon the pun) my interest in motor racing ever since with the 917 being my favourite car. Back in 2000, I met someone who had a model of one and he told me that his godfather was the racing driver Pedro Rodriquez; a man who achieved fame for driving the 917 brilliantly. Once I found out that model Porsche 917’s were being made it wasn’t long before I obtained one myself; with Steve McQueen’s racing number on it.

The model sits in my office, in pride of place on a shelf. It has never been put into storage, never relegated to a box in the garage. I’ve unloaded a lot of bric-a-brac I’ve accumulated over the years but never this. As well as the car, I have a framed photo of Steve in his racing overalls plus the excellent book “A French Kiss With Death” by Michael DeKeyser and Jonathan Williams; an in depth account of the making of the movie, the history of the race, the story of the 917 and a biography of Steve McQueen all in one book.

One day I would love to travel to Le Mans to see the 24 hour race but the course has changed and there’s no car as beautiful , as fast and as powerful as the 917 to race it. Therefore, the movie serves as a perfect time capsule.