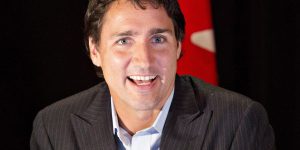 OTTAWA: Canadian Prime Minister Justin Trudeau has proposed a bill in parliament that will see Canada renounce its status as a geopolitical entity.

“From today, Canada is no longer a thing. It will be the first post-nation nation.” He said from his office in the former capital, Ottawa.   “We will lead by example by getting rid of our nation status, rubbing our name off the map and giving up on all our treaties and obligations.  When people around the world hear the word, Canada, in future they will say ‘who hell they?’”

When asked about the fate of the people of Canada, Prime Minister Trudeau responded “I think that’s a very life-form-ist question.  Canada…I mean…what was somewhere called Canada…is made up of many, many different life forms from single celled amoeba way up to the highest form of life in our great nation, I mean, this area of land:  The Caribou.  To single out just one animal species, and the only species to have practiced racism, sexism , homophobia, trans…have I left anyone out?  Oh yes, and disablism, for attention is a deeply ist behaviour and one of the reasons why we’ve legislated the country out of existence.”

“The humans of ex-Canada” he continued “will be allowed to stay on in the land area and co-habit it with other species, and of course this land will still have a strong legislative body overseeing day to day business with my pledge to stay on as a kind of leader, of sorts, until such a time when we transition to a non-land based system.”

Asked to clarify his remarks about non-land based systems, the Prime Minister said “ideally if we’re going to be a non-nation it would be best if we had no land mass. You can only be a country if you have land area so if we get rid of that, then there will be no temptation to re-start Canada in the future.

Pressed on how he can pursue an eco-friendly policy with a plan to destroy the land mass of the second largest nation in the world, the Prime Minister was defiant. “No, I don’t see any contradiction in that at all” he said, stopping smiling for just one moment.

Further questions were asked about how former Canadians should be referred to, Trudeau said “oh there’s a wide range of possibilities from the zshey, the zschem, the zshose…I’m beginning to sound like Sean Connery” he said with a coquettish giggle. “Although I’ve heard he beats women and that’s not good” he said, as his face changed to a very serious look.

And non-Canada’s relationship with the USA? “Oh that will be fine…I’ve told President Hillary that she and all Americans can just wander over the non-existent border anytime and help themselves.” When Trudeau was told Hillary Clinton was not yet president he seemed shocked.  “Oh, so she has to be elected first?  Hmmm….” He mused, whilst looking out of a window.

The bill will see Canada reduced to a bit of land jutting out of the USA that has some folk on it, but when asked about Quebec’s fate Trudeau replied “oh Quebec is still a thing. Totally.”