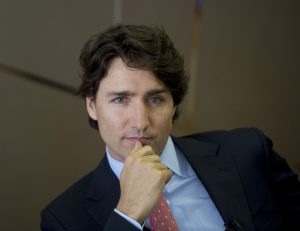 OTTAWA: Prime Minister Justin Trudeau declared himself to be officially “Omnipinionated”.  “I hold all opinions to be equally valid” he said in a press conference.  “I believe in diversity, except when it comes to Canada because there really isn’t a Canada.  Although the maps say there is but who am I to criticise map makers?  They have their jobs to do, for now.”

He then went on to expand on his vision for an Omnipinionation. “I’m for feminism, I’m for segregation when it’s backed up traditional religious values, I’m for as many gender options that you can think of, I’m for freedom, I’m for restricting freedom, I’m for token gestures, I’m for caring, sharing and no-platforming.  Whatever you want, I want it too. “

Trudeau also made a point that the real enemy of society was not poverty, inequality or external threats such as terrorism. “Our real enemy is informed opinion…especially opinions that cannot be held alongside an opposing opinion.  This is against omnipinions.  So when people say ‘how can you praise segregation in mosques and yet be a champion of feminism?’ they’re trying to force all of us to make a choice, instead of accepting all choices available to you simultaneously.  And when people chose not to use our pronouns out of principle, then they’ve chosen a single principle instead of all principles available to them and say they’re in favour of everything.  That’s bad.  All of it.  And yet it’s not.” “So we’re sad we can’t have a trade deal with Europe because of the Walloons; but we praise them for their courage.”