When I was growing up in the 1970’s and Saturday TV in the daytime meant watching The Flashing Blade or Swap Shop and drooling over Action Man adverts, my boys’ own junior machismo world would be shattered by the Triumvirate of Girls-On-Horseback shows: White Horses, Follyfoot and Black Beauty. I tried to avoid them: That sickly theme tune from White Horses would have me doubled up in gut wrenching agony, I couldn’t care less about Follyfoot Farm and would be happy to see it bulldozered down to make way for a Tescos and as for Black Beauty, well a one way ticket to a glue factory seemed too good for it. However, I increasingly found myself magnetically drawn to them for reasons other than scenery and horses.

If there was a time in my life I can actually pinpoint as the awakening to the idea that girls did not automatically carry some deadly infectious disease which would kill you on contact with them, that they actually were the same species, or at least phylum, as me and that they were… well… nice to look at, then it would have been around the time I started to see beyond those goddam horses and admire the girls that sat astride them: Helga Anders, Gillian Blake and, the #1 of them all, Judi Bowker.

There may have been more classically beautiful actresses in history than Judi, but I don’t think any are prettier. With long fair hair, striking large blue eyes and porcelain skin, she is the living embodiment of the English Rose and the kind of girl you could take home to any set of parents on the planet and they would all want to start planning your wedding instantly. And it’s that quality of innocence and of purity that she naturally projects in her performances that makes her so captivating to watch. She also spent nearly her entire on-screen acting career in a time between the sexual shenanigans of the Sixties and the brash predatory lifestyle of the 80s. Only in the Seventies, it seemed, could Judi have prospered on screen.

The start of her comet-like film career was at the age of 18 with the 1972 television series “The Adventures of Black Beauty”, although she had begun to act and perform on stage since her childhood and had trained as a ballerina. Each week, Judi would be absolutely doe eyed about Beauty and bestow anthropomorphic qualities on what was basically a pretty nice looking black horse. Local caddish squires would find ways to claim Beauty as their own, prompting Judi to burst into tears and go running to daddy… which was mercilessly parodied by Tim Brooke-Taylor in an episode of “The Goodies”. 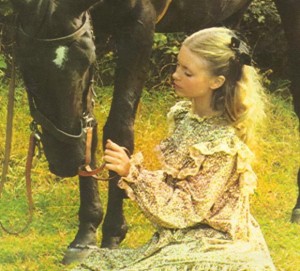 But the show had various aces; the stirring theme tune, beautiful cinematography of the English countryside that has seldom been matched and Judi herself. Being very beautiful, she graced the screen and stole the show from everyone… well, except for perhaps the horse: It pays to have your name in the title.

This youthful star quality and ability to command the audience’s attention was not lost on film makers, in particular Franco Zefferelli. He cast Judi as Sister Clare in “Brother Sun, Sister Moon”, the St. Francis of Assissi movie, in 1973. Alongside another movie newcomer, Graham Faulkner, Zeferelli tried to capture the youth and vitality that he had in his 1968 version of “Romeo and Juliet” with Leonard Whiting and Olivia Hussey. Whereas Hussey’s Juliet descended into girlish bawling at any setback, Judi seemed to be made of sterner stuff: She mixes it with lepers and outcasts and doesn’t so much as whimper. Juliet’s courage may have failed her, but Sister Clare’s never does and Judi manages to show that bravery and nobleness of her cause under her innocent visage. She also provides a wholesome, largely platonic, female interest for St. Francis and when she is spotted gambolling down a hillside to meet him, the joy registered on Faulkner’s face seems genuine. 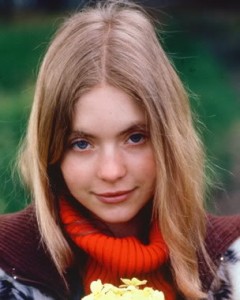 A pattern starts to emerge with Judi’s film appearances beginning with this movie: She’s filmed in beautiful locations, she gets to gambol and run gleefully down hills and in meadows, she has a holy/spiritual vibe going on and she indulges in lustful, but non-sexual dalliances with those smitten around her. You get this with “In This House Of Brede”, where she plays another novice nun, although she bowls over a senior nun played by none other than Diana Rigg. Ahh… Rigg, Bowker and nun’s habits… and before your minds can get really mucky… no, nothing like that happens: It rarely does in a Judi Bowker movie. But Judi showing up at a convent and wanting to live the holy life was usually a harbinger for turmoil just around the corner. Too sweet for the secular world, too goddamn gorgeous for the cloistered life; that was your typical Judi character.

However, it wasn’t all sweetness and light. Like most actresses of her generation, there were horror films to be made but unlike her peers, she stayed clear of the Hammer and Amicus stables and instead appeared in more prestige efforts. There was her introduction to the genre in the 1973 version of “Dr. Jeckyl and Mr. Hyde” starring an all singing and dancing Kirk Douglas before what was arguably her greatest role; playing Mina Harker in the 1978 BBC TV version of “Count Dracula” starring opposite Louis Jourdan’s Count.

Judi’s portrayl of Mina builds apon what she had given before: A mixture of innocence and inner strength, only this time the sexual awakenings of her earlier roles are given a 1000 bugle revellie wake up call. She’s both attracted to and repulsed by the Count and the scenes with her and Louis Jourdan are charged with enough energy to please a climate change summit. For many who have seen a great number of Dracula adaptations, Judi is the definitive Mina Harker.

It could have launched her into a number of high profile, big budget roles but there’s a gap in her resume of four years. “Count Dracula” met with mixed critical reactions. For generations who had grown up with an idea of the story being full of capes, wide eyed theatrics and lush Hammer style colour, a TV adaptation using a mixture of grainy film stock and bright videotape and an urbane, slightly underplayed Dracula as embodied by Louis Jourdan jarred with them. Seen today, it’s a masterpiece but back in the day when people expected an “I, Claudius” with their pie and chips every night, it disappointed. Some of that backlash may have hurt Judi’s career. 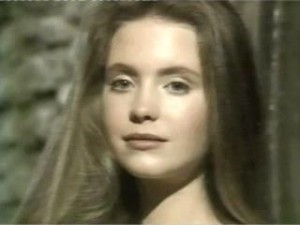 But by the start of the 80’s, she was  back in major international movies. In 1981 she appeared in the movie that most fantasy geeks know her for: “Clash of the Titans”. Unfortunately, a lot of those geeks mistakenly think it was Lysette Anthony in the role, which has pushed Judi further into the background. Again, she radiated, she gleamed and she was the perfect reason to go taking on cyclopses, hydras and krakens. But the movie wasn’t a true test of what she could do, not for someone who had cut their teeth on Zefferelli and Bram Stoker.

In 1984 came her last, truly great role on screen: Lady Olivia Lilburn in “The Shooting Party” which was James Mason’s last movie. She was, true to form, playing a daughter of privilege but one with a conscience and heart. She steals the movie and gives the audience someone to root for as various upper class twits blast the countryside into oblivion.

A couple of Hollywood mini-series followed and by 1986 things slowed down to a crawl, then nothing. She was barely into her 30’s and it seemed like things were over for her, as far as movies and TV were concerned. I’ve searched hard, but there’s no obvious reason for her disappearance from the screens. Were the parts no longer there?  Certainly, Judi embodies a different era and it’s hard to see her in the shoulder padded big hair 80’s productions or the hatchet faced angsty dramas of the 90’s where you needed a  regional accent to get on. Did she get bored or jaded? Possibly. She married actor-director Harry Meacher and maybe family life appeals to her more than just movie making for movie making’s sake. One thing about Judi is that there are no skin flicks, no shoddy Euro co-productions and only one trashy mini-series in her resume. Looking at it, quality always came before quantity and maybe that’s the explanation for her being underused.

But she has appeared in some short films and independent productions, the kind that you only get to hear about if you’re doing research for a website about 70’s British actors. Seeing her in her fifties, she still radiates beauty and goodwill. The eyes still have softness and soul. The mouth smiles slowly, but joyfully. But there was something else I noticed… she’s started to play the villainess. And seeing those eyes and that smile used for malevolence makes me see that beneath the soppy girl on horseback, there’s a Lady Macbeth lurking underneath.

There’s still time for Judi to come back and knock everyone over once more. 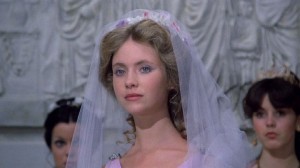