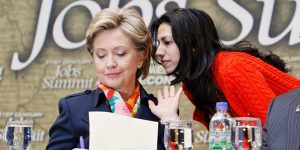 Looking for a robust counter-argument to claims that Hillary Clinton is guilty of corruption or violations of national security, Democrats have settled on a single, official response: “Well double dumb-ass on you!”

The response was inspired by a bit of 23rd century slang popularised by Admiral James T. Kirk in “Star Trek IV: The Voyage Home”.  The rebuttal not just accuses the recipient of being a dumb-ass, but a double dumb-ass and that any responsibility is all on them.

Rocked by further investigations by the FBI on Clinton, her official campaign team held late night meetings in order to draft a response to critics in the media. “We were in a difficult position” said Clinton campaigner Ana Petrosian “with an FBI investigation in progress and not being in possession of much in the way of facts we had to come up with a holding response until we could assess the allegations more closely…we felt ‘well, double dumb-ass on you’ would be a good, ready-made, multi-purpose comeback our supporters could instantly use.”

The quip has come as welcome relief to left-leaning comedians and commentators such as John Oliver, Jon Stewart and John Fugelsang. A spokesperson for Fugelsang said “John’s really been struggling for a comeback to all the ‘Hilary corrupt’, ‘Hillary a security hazard’ comments he gets…so far he’s not been mentioning the FBI investigation at all and with each day it looks a lot like he’s ducking the issue and hoping no one notices.  Now he can say ‘well, double dumb-ass on you’ and send those Trump voters running.”  Oliver has said he’ll use the British variant “dumb-arse” instead.

Trump supporters are unconvinced by the rebuke. Gary Felding, a leading figure in the Arizona Trump team, commented “it’s pretty lame as far as come-backs go.  We got into a lot of trouble by downplaying disgusting sex chat as locker room banter but this?  I mean, it’s not much better than saying ‘la la la la I can’t hear you’”.

The Clinton Campaign Group said “what a great suggestion! We’ll use that one as well!”