What would be your reaction if I said the word “bulge”? OK, let that reaction sink in…OK, now let me explain.

This morning I was having thoughts on the Battle of the Bulge. (Hang on, I’ve just read that last sentence back…and out loud…I love days where I can make statements like that). Of course, proper military historians like Alan Baigent call it the Ardennes Offensive (and I thought that was a Belgian footballing term for a professional foul) but to most of you lot, you’ll probably remember the movie with Henry Fonda and Robert Shaw kicking petrol cans into German tanks. It was Hitler’s last gamble to defeat the Allies, yada, yada yada. You get my point, and if you don’t, then Google “Battle of the Bulge” and ignore the first 20,000 porn sites.

Anyway, this battle produced a whole slew of board wargames in the late 70’s and early 80’s all claiming to simulate all the nuances and desperate situation of the battle. And as time went on, the games got more bizarre titles: “Battle of the Bulge” started it, and then “Ardennes ’44”, “Hitler’s Last Gamble” (which ignored the impromptu dominoes game in the Bunker in his last days), “Drive on Bastogne”, “Patton’s Glory”, “Nuts!” (yes, in the folklore of the Battle of the Bulge, the word ‘nuts’ features heavily), “Battles for the Bulge Quad” (4 games in 1 in case you were wondering), “The Road to Wiltz” and even “One Page Bulge”. The mind boggles. But my absolute favourite, because the game designers clearly didn’t see the implications of the title, is “James F. Dunnigan’s Bulge”. Dunnigan is a legendary games designer whose heyday was in the 70’s and 80’s. And by legendary I mean he’s highly respected and not a pointy eared guy with a sword who saves kingdoms from giants and such stuff. 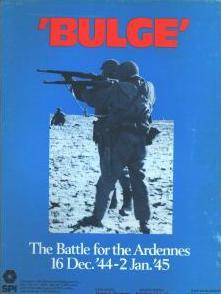 Back in the days when I had hundreds of board wargames, I had no desire to purchase Mr. Dunnigan’s product, open the box and check out his Bulge. My name’s Nick Hughes, I’m here all week.