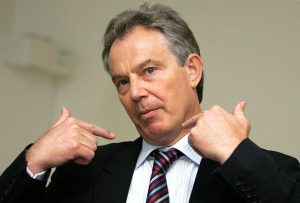 “We should definitely have one” said reviled ex-PM Tony Blair, instantly turning millions off the idea.

“Once the British public know the seriousness of the impact Brexit will have I believe they deserve a second referendum…” continued Mr. Blair, whilst pro-EU members of parliament started to tear their hair out in despair as the disgraced former Prime Minister spoke on. The Liberal Democrat leader, Tim Farron, was frantically miming a cut throat behind Mr Blair, entreating anyone to stop him talking, but it was too late and the damage was done.

Remain voters immediately started to question their opposition to the Brexit result. “Well if that war criminal is in favour of a second referendum, count me out!” said Elizabeth Shutt, a graphic designer from Barnes, London.  Shutt had been busy on social media organising petitions to hold a second ballot but she now says she will give up and reluctantly embrace the original result.

“The moment I heard that soft Tory sell-out open his big, lying gob I went down to the pub and got roaring drunk” said Iain McFarlane, 43, of Edinburgh. “He’s absolutely killed it.”

This mood was reflected right across the country as millions who have grown to despise Mr Blair since his time in office came to the conclusion that if he was for a 2nd referendum then it meant it was an awful idea and should be abandoned.

Giles Bratt, of the pro-EU website “We F****** Love the EU” took a moment from repeatedly banging his head against his desk to comment “it was all going so well, we were almost there in convincing people to change their minds about Brexit but then he had to wade in and ruin it all! Why couldn’t he have stayed in the Middle East and continued his good work there instead?”