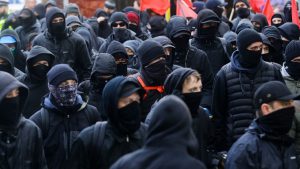 Anti-fascist protestors who hold similar views to actual fascists today protested against those who they deem fascists but who hold views very different to fascism.  Meanwhile, a bemused real fascist, Norbert Riddling, watched on trying to attract the attention of the anti-fascists.

The protest organisers; Janet Spang and Rob Craddock, led chants and calls for sanctions against Mrs Jayne Priddy of Hemel Hempstead who was believed to have voted Conservative at the last General Election and is known to hold various centre-right beliefs such as freedom of speech, free enterprise and the nuclear family.  “FASCIST OUT!  DON’T FUND HATE!  FASCIST SCUM!” chanted the group, which numbered around 200.

Spang explained why they were calling for direct action to censure Mrs Priddy.  “There’s a dangerous rise of right wing fascism in this country and we need to stop it now!  Priddy is guilty of hate speech, hate crimes and identifying as right wing which automatically makes her a fascist!”  When pressed on what, exactly, she said that identifies her as being a fascist, Spang replied “she’s openly come out in favour of free enterprise, which is a hate crime against the unenterprising, she thinks traditional families are a good thing, which is hate speech against single parent families and she’s voted Conservative since 2010 which is a hate crime against society as she’s guilty of murdering anyone who dies from welfare cuts.”

The anti-fascist protest group have demanded Priddy’s employers dismiss her from her job, that she be no-platformed from speaking in public and that she be sent by the court for re-education.  Meanwhile, actual fascist Mr Riddling, said “hey, those sound like pretty good ideas….much in line with what I think.”

Mr Ridling explained how the anti-fascist group might be a potential ally for his own group, which numbers six.  “I’ve listened to these protestors and they’re big believers in state control in welfare, the economy and society which sounds a lot like our saying “all within the state, none outside the state, none against the state” and they’ve got interesting ideas in censoring news and information so that only the ‘right’ opinions are heard.  Count me in!  Plus, they’ve got this really combative, aggressive style about them which, frankly, gives me a rock-on.  They even wear black uniforms which is right up my alley.”

But the protestors ignored Riddling as he attempted to make contact with them and instead targeted their anger at Mrs Priddy.  When asked what, actually, constitutes fascism Rob Craddock struggled to come up with a confident answer.  “It’s being right wing and…erm….I mean, that’s it really.  Being right wing in general.  It’s all fascism, innit?  TORY FASCIST SCUM OUT!  FASCIST HATE CRIMINAL AND SUCH STUFF!  LIBERTARIANS OUT!  CENTRE-RIGHT ARE FAR RIGHT!  COMBAT HATE WITH….erm….HATE!”