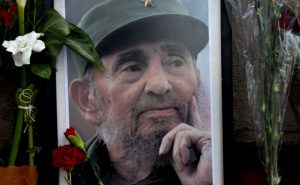 “We were contemporaries” said Zimbabwean President Robert Mugabe.  “I’ve longed looked to Castro’s Cuba for inspiration; from seizing property from private citizens, arbitrary death sentences for dissidents and clinging on to power for decades and decades…Fidel was the master and I’m merely his pupil.”

Fellow African leader, Jacob Zuma, paid his own tribute.  “Fidel was always giving me hints and tips on how to syphon government funds to line his own nest, how to develop a network of cronies and of course his attitudes to homosexuality have formed the basis of a lot of my beliefs about benders and their AIDS.  Ugh!”

From Venezuela to Vietnam, some of the most corrupt and authoritarian heads of state or senior representatives who have turned prosperous countries into despotic hell holes have all cited Castro as a hero, a leader and an inspiration.

Canadian Prime Minister Justin Trudeau was planning to attend but had to cancel when he found out that many of his countrymen are outraged at his fulsome tributes to the deceased tin pot dictator.  “Wow, I’m amazed at just how hated he is in Canada…and a lot of other democratic countries.  Who knew?” He said.  However, Mr Trudeau has sent a card of condolence with the note “I hope you like the flowers”.

Meanwhile in Washington D.C., Vice-President Joe Biden wanted to send his own special message to Havana.  “With all those enemies of ours gathered in one place, why don’t we just cruise missile them, Barak.  Take ’em all out!  Whatcha say?”

The President replied “Joe, this isn’t one of your memes.  Give it a rest.”