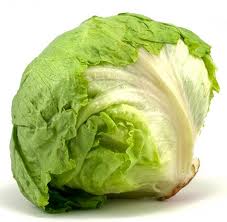 Image: Get Healthy Get Clean

UNITED KINGDOM……NOW!  Tesco and Sainsburys, two of Britain’s largest supermarket chains, have announced that they will prevent unreal shoppers who buy more than 3 iceberg lettuces in one weekly shop.  “No more will customers buy 4, 5 or maybe even six iceberg lettuces for goodness knows what reason” said Tesco spokesman Ivan Gilby.

Iceberg lettuce hoarders, who hitherto have not even been conceived of let alone actually existed, will be targeted by a campaign of lettuce rationing that must have cost the companies time and money to actually draw up a plan for.  “Even though no one outside of the catering industry has ever actually bought more than 2 iceberg lettuces at a time” said Sainsbury head shopper Marie McClure “we had to have a contingency where someone throwing a party for more than 50 people and who would all like a green salad in February could be stopped from clearing out our entire stock in one go”.

It has been a bad winter for vegetables grown in the Mediterranean and the iceberg lettuce shortage that has resulted has hit that bizarre sub-group of British shoppers who eat green salads in the weeks following Christmas.  Caitlin Grieve from Hampstead in London and who blogs about middle class mental illnesses  is worried that she won’t be able to serve up a cold meat platter and a salad selection to her family and friends at dinner time in the cold winter months.  “We like to eat healthily and sustainably so instead of consuming seasonal vegetables we like to have salads with ingredients flown in cold storage from warmer climates.  Not only that, we eat a salad TWICE A DAY AND EVERY SINGLE DAY” she said.

Conceivably professional caterers who have suddenly run out of lettuce due to poor planning and who send a flunky to procure some from a local supermarket might be drastically affected by the 3 lettuce limit but retail analysts are struggling to think who hell would want to buy more than 3 in one week.  Food specialist Tony Diago told Rhubba “I mean, who has used even one whole lettuce to make a salad for a family of 4 or even 6 people?  Have you seen how far those things go?  It’s almost as if supermarkets have invented a food panic scare to shift stocks of lettuce at a time when it traditionally doesn’t sell well at all.  That makes slightly more sense than some diabolical lettuce buying freak clearing store shelves of the stuff.”

Waitrose have said they’ll be soon be selling Duchy Essence of Lettuce puree in most of their stores.