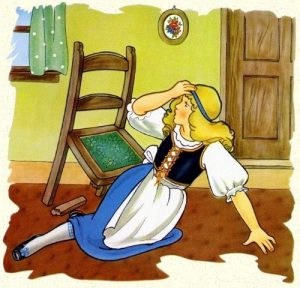 Notorious trespasser, Goldilocks, took to social media today to launch a series of complaints about the value of Pound Sterling. “First it was too high, waaaaaaaaaa, and now it’s too low, waaaaaaaaaaaaaaa, why can’t it be just right?”

Her rants found favour among pro-EU bloggers, including Giles Bratt of “We F****** Love The EU” saying “this is more proof that Brexit will harm us all; our fairy tale characters are getting hit by the economic instability.  When will this madness end?”

Ursus botherer Goldilocks, 9, is a frequent overseas traveller, mostly to venture into the dark German woods she’s been warned against going into.  “First I get clobbered when returning the UK because the pound was too strong, now I can’t buy enough gingerbread with my money when I go to Germany….I like my currency the same way as I like my beds, chairs, porridge and habitable planets:  Just right.”  So overcome by grief, Goldilocks had to be helped to various chairs, most of which proved unsatisfactory.

Various financial experts tried to explain the volatility of the money markets to her but the porridge cuck just went off in a huff to find someone else’s bed to lie in.